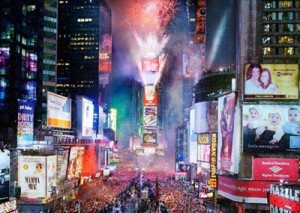 Happy New Year Everybody! 新年快乐! Here’s to 2012! Ok, before I receive a plethora of comments and posts about this not being the official Chinese New Year, I urge everyone to slow their roll and take a big, deep breath. Feel better? Ok good, because contrary to popular opinion in the mainland, the official, global New Years holiday is celebrated this coming Sunday, January 1st. Sorry China, but that’s what happens when the rest of the world switches from a lunar calendar to a Gregorian one (blame the Romans, China).

Think about it in logical Chinese terms. The beginning of every year should start on 1/01, which coincides with the Chinese format of placing Year then Month then Day 2011 年, 01 月，01 日. Now that we’ve gotten that cleared up, lets take a look at how the rest of the world celebrates the globe’s birthday.

The real holiday for New Years actually occurs on the night before the date change. This date, known as New Year’s Eve or 元旦前夜 (Yuándàn qiányè), is one of the largest celebrations worldwide. During this time, people often get together with family and friends to enjoy festive meals, drinks and to watch the grand displays of lights, fireworks and the infamous countdown toward midnight or 半夜 (bàn yè). 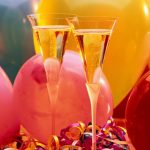 In large cities like New York, Tokyo, London and Paris, people conglomerate in the hundreds of thousands to usher in the new year. For non-Chinese people, New Years Eve is that last opportunity to revel in the old year, which means a good deal of drinking, merriment and lots and lots of noise (and kisses). People traditionally pop bottles of champagne in the lead up to and right when the clock strikes midnight.

People also partake in “New Years Eve Resolutions” or commitments that people make to themselves for the new years. These resolutions can include stopping eating candy, the always famous “my resolution is to exercise more”, or bad habits (such as smoking) that they would like to quit in the coming year. Most resolutions, however, don’t make it out of the month of January.

The actual day of New Years is more of a reaction to New Year’s Eve than an actual holiday. Most people spend it sleeping in late and/or nursing hangovers or 宿醉 (Sù zuì) caused by a long night of rowdiness and attachment to those very vices people are looking to end with their resolutions. However, once the dull headache subsides, New Year’s Day often entails another big meal (either brunch of family lunch/dinner), followed by relaxing in front of the fire or in front of the TV (in the US New Year’s Day is a huge day for Football and sports events).

When night falls, many people celebrate “First Night”, or the first night of the new year, which includes more fireworks, lighting ceremonies and festivals. After all is said and done, the New Year’s Eve to New Year’s Day holiday festivities have you prepared for your new endeavors as the frigid winter creeps in.

Happy New Year Everybody! 新年快乐! From all of us on the Transparent Team we’d like to sincerely thank you for following and supporting us. We love what we do and we’re glad we can share our passion of all things Chinese with you. We couldn’t have done it without you! 谢谢您们！