Rare Earths (稀土金属) Posted by Stephen on Jul 28, 2011 in Uncategorized 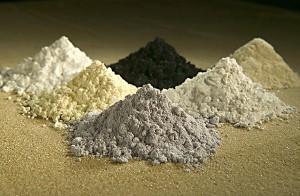 There’s been a lot of focus on China and rare earth in the press lately, so I thought I’d take time with a quick post to explain the value of rare earths and why they matter so much in contemporary politics, trade and economics.

Rare earths or 稀土金属 (xī tǔ yuán sù)are a collection of 17 elemental metals, including yttrium, scandium and fifteen other lanthanides. These metals are crucial in the production of everything from electric car batteries, wind turbines, electronic displays, aerospace alloys to petrol refining. They are also highly valued as magnetic alloys within the industrial military complex and computer industry.

China, which holds roughly 95% of active global rare earth deposits, namely in the iron ore rich regions of Inner Mongolia and Tibet, is able to extract these highly toxic and volatile chemicals at very low costs compared to the rest of the world. The result of which has been rare earth industrial and growing technological dominance by the Chinese over the last decade as almost the entire industry has moved within Chinese borders.

Almost every high-tech industry needs some component of these seventeen lanthanides, which has accounted for the increase of production until this previous summer. In China, the vertical integration of extraction to production of these rare earth products also allows for technological advancements within rare-earth dependent markets even before they leave Chinese borders. This allows for exponential growth within domestic Chinese industries that can directly compete with highly developed nations such as Japan and Korea regionally, and the US and EU globally.

Chinese Rare Earths: Why They Matter

If petroleum was the fuel of the 20th century, then rare earths will undoubtedly emerge as the fuel of the 21st century. Much in the way that OPEC and oil-rich Middle East nations created cartels to limit supply and mitigate the depletion of oil reserves, the Chinese are aware of how valuable these rare earths are domestically and globally and are making sure they don’t sell themselves short. This is because rare earths are fundamental to most high-tech products and technologies, the industry now receiving attention in the recent rare earths debate is that of renewable energies (which we covered at length in my Green China posts).

Recently, Chinese officials have heavily restricted production of, and exports of rare earth elements through the use of quota limits.  The justification for protecting these rare earth elements was “to conserve exhaustible resources and maintain sustainable development” so that the Chinese economy can transition  from low- and middle-tech to high-tech industries. In controlling rare earths, the Chinese look to control every industry from wind turbines to smart phones, ensuring that the next electronic or high-tech good you buy will have a “Made in China” stamp on its underside.