Six Common Phrases of the Character 开 Posted by Ayana on Sep 13, 2021 in Vocabulary 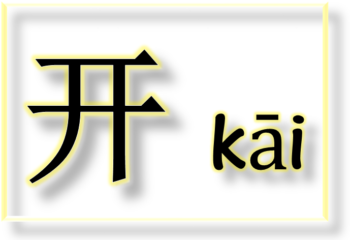 开 (kāi) is one of the first Chinese words I learned. I remember it from my first Chinese classes. It was part of their routine: the students were already sitting on their chairs, thick textbooks on their tables, when the teacher arrived. She entered the class, greeted us kindly, and asked: 请打开书 (qǐng dǎ kāi shū, please open the books).  打开 (dǎ kāi) is a verb, meaning to open, to turn something on. It can refer to a book, box, gift, window, door, TV, and so on. For example:

She turned on the light.

The room is too stuffy, open the windows.

Is it polite to open the gift the guest brought in front of him?

张开 (zhāng kāi) is another verb that means to open, to spread. It usually refers to objects that can be widely stretched out, as body parts, leaves and petals, collars, sails, clouds, etc. For example:

The sails have been opened.

The petals opened in the sun.

He opened his mouth and couldn’t speak.

Another common phrase with the character 开 is 开放 (kāi fàng). 开放 is a verb with a different meaning of opening. It doesn’t refer to objects; it belongs to the semantic fields of regulations and flora. When referring to flowers the verb 开放 means to bloom, to come into bloom. For example:

The petals of many flowers bloom in the sun.

开放 also means to open to the outside world, to open for public use. It is well known from the Chinese term of the Opening of China in the late 1970s: 改革开放 (gǎi gé kāi fang, Opening Reform). The reform’s goal was well concluded in the Central Committee meeting:  改革开放可总结为对内改革，对外开放 (gǎi gé kāi fàng kě zǒng jié wéi duì nèi gǎ igé, duì wài kāi fàng, the Opening Reform can be summarized as internal reform and opening to the outside world).

开 also stands for itself. It’s a verb meaning to open, that is used without the character 打 preceding it. It refers to any object, but notice that with some objects the 开 + object phrase bears extra meaning. The phrase 开门 (kāi mén, to open + door), for example, has two meanings. The first simply means to open an actual door, and refers to the physical action of opening the door. The second usage of the phrase 开门applies to stores, restaurants and other commercial services. It means to open the door in order to receive the public, to start the business day. For example:

What time does the clinic open tomorrow?

This office is closed on Sundays.

We have to wait for the guards to arrive before opening for trade.

Other phrases of 开 that relate to the business world are:

开业 (kāi yè) = to start a business, to set up a business

开张 (kāi zhāng) = to open a business, to be open for business

She plans to leave the company and start her own business.

The office will reopen again.

Although 开 and the above common phrases bear the meaning of opening, the character 开 has also many other meanings and usages: