Stackin’ that Kuai! Posted by sasha on Jun 16, 2011 in Culture, Uncategorized 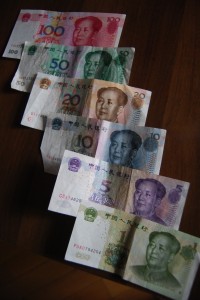 In China, the official name for currency is RMB (人民币 – rén mín bì), meaning “the people’s currency.”  However, in daily dealings it is often referred to as yuan (元 – yuán) or the slang term kuai (块 – kuài), kind of like how we say “bucks” in the US sometimes. While American dollars (美元 – měi yuán) feature various notable figures on the front, all Chinese RMB notes feature the country’s founder – Chairman Mao Zedong (毛泽东主席 – Máo zé dōng zhǔ xí). While there is no variety when it comes to the front side of that kuai in your pocket, there are plenty of famous and beautiful sights to be seen on the back:

The back of the 1 yuan note shows the peaceful and tranquil West Lake (西湖 – Xī hú) in beautiful Hangzhou (杭州 – Háng zhōu). This is the capital city of Zhejiang Province (浙江省 – Zhè jiāng shěng), and is a major tourist destination in China. 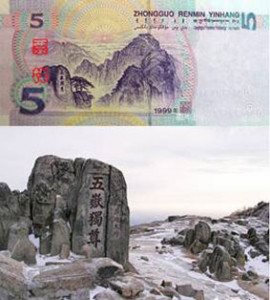 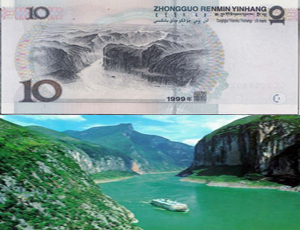 Moving on to the 10 yuan note, we see one of the most famous landscapes in all of China – the Three Gorges (三峡 – Sān xiá) on the epic Yangtze River (长江 – Cháng jiāng). Perhaps one of the most awe-inspiring and legendary images from all of China, the back ot the 20 yuan note shows the majestic Li River (漓江 – Lí jiāng) in the very popular tourist destination Guilin (桂林 – Guì lín).

The 50 yuan is certainly the most controversial of the Chinese bank notes, as the back features an image of the Potala Palace (布达拉宫 – Bù dá lā gōng) in Tibet (西藏 – Xī zàng).

Last, but certainly not least, we have the big one – the 100 yuan note. The back of this bill depicts the all-important Great Hall of the People (人民大会堂 – Rén mín dàh uì táng), which is located in Tianamnen Square in Beijing and is used for government functions.