The Delicious Food of Lanzhou Posted by sasha on Aug 28, 2017 in Culture

Chinese cuisine is one of the best in the world. It’s incredibly diverse, with different regions having their own unique specialties. One type of restaurant that you’ll see all across the country is Lanzhou Pulled Noodles (兰州拉面 – lán zhōu lā miàn). Let’s learn more about this style of Chinese food and see what’s on the menu there.

Lanzhou (兰州 – lán zhōu) is the capital of Gansu province (甘肃 – gān sù) in northwest China. It’s on the banks of the Yellow River (黄河 – huáng hé) and is a major transportation hub and industrial center. Once upon a time, Lanzhou was an important link on the Silk Road. 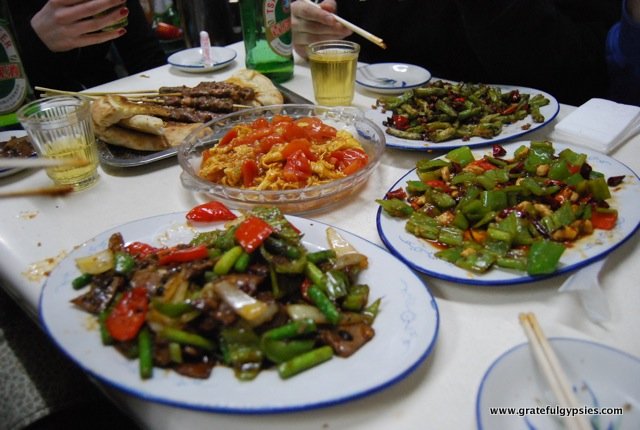 As with much of China, a majority of Lanzhou’s population are Han Chinese. The city is also home to a substantial number of Muslim Hui people (回族 – huí zú). Their influence on the cuisine of the city is clear, as you won’t find much pork on the menu. Instead, you’ll find plenty of delicious beef and mutton. Here are some of the most famous Lanzhou dishes. Get ready for your mouth to start watering! 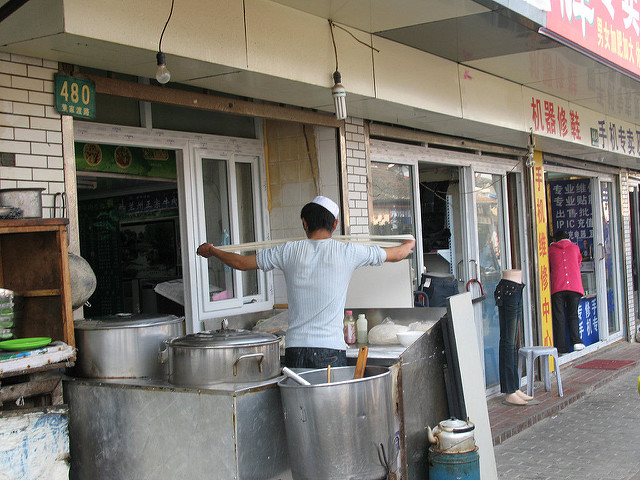 First and foremost, Lanzhou is known for its pulled beef noodles. It seriously seems like there’s a Lanzhou noodle joint on every corner in China. A big bowl of these will fill you up and usually only costs around $1.50 or so. No wonder it’s so popular! While the noodles are amazing, there’s lots more to eat here. 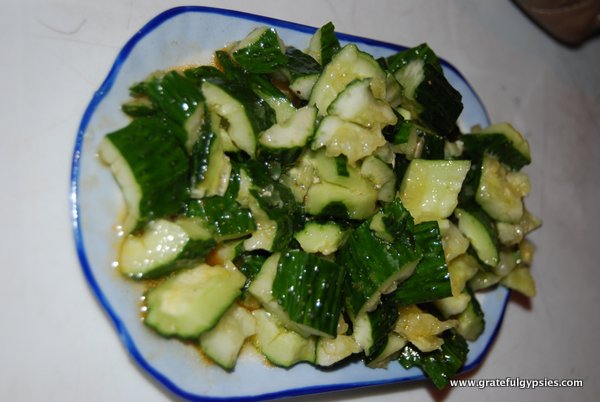 This isn’t exactly a traditional Lanzhou dish per se, but it is widely available in restaurants all across China and it’s always done well in Lanzhou restaurants. Cucumbers are smashed up with garlic, oil, vinegar, and a little bit of chili for an amazing appetizer. It will also help cool you down if you eat some seriously spicy stuff later in the meal. 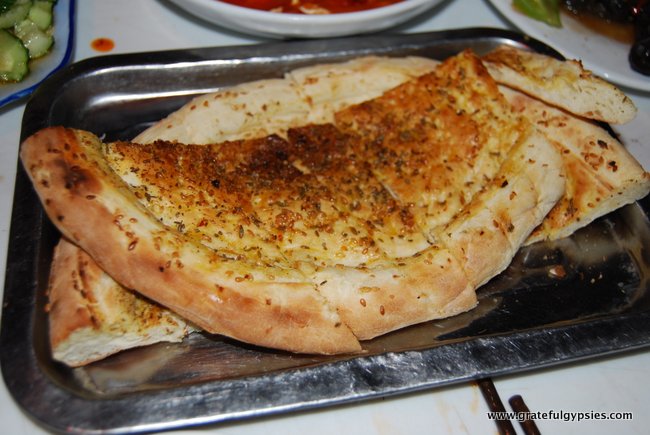 You’ll need plenty of this.

As rice and noodles are staples in most Chinese restaurants, it’s always refreshing to have some tasty, spicy, grilled naan bread to enjoy your meal with. You can dip it, cover it, or just eat it on the side. Make sure you order up a few plates of this stuff! 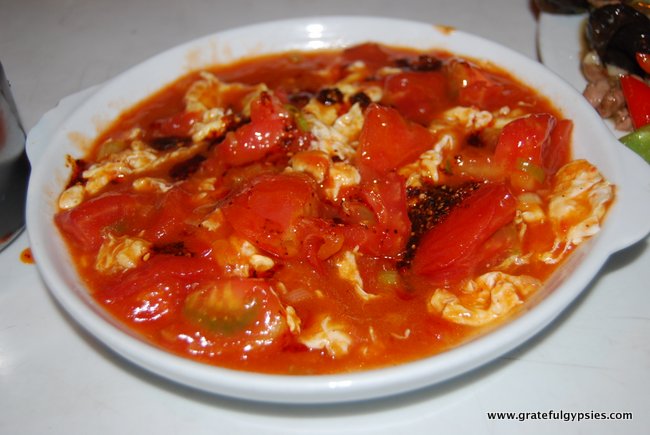 A perfect dip for your naan, and good for vegetarians as well!

Again, this is a typical dish anywhere in China and isn’t exactly exclusive to Lanzhou, but damn do they do it well! I’ve tried this dish well over a hundred times in restaurants all over China, but my favorite version remains the one at my local Lanzhou joint in Beijing. With a bit of chili sauce, this becomes the perfect dip for your naan bread. 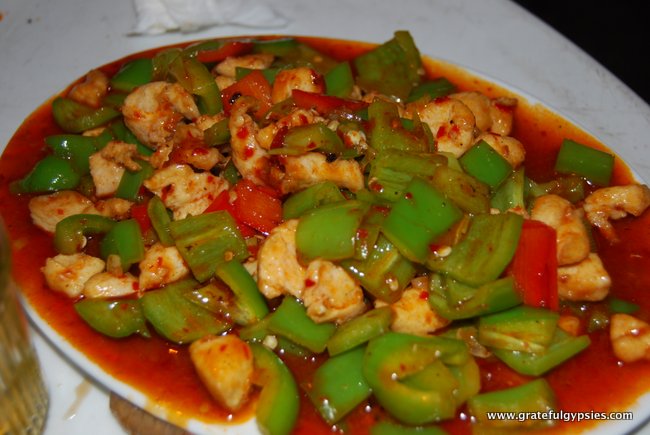 So far, this meal has been great for vegetarians, but we need some meat! This dish is simple but amazing – diced chicken, green and red peppers, plus a spicy sauce. Many restaurants make this dish, but Lanzhou joints do it the best. 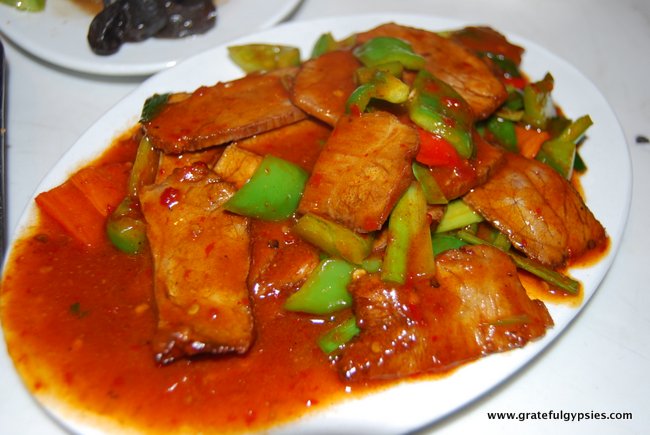 This dish gets its name as the meat is cooked twice – once on its own and again with the spices and sauce. “Return to the pot meat” is a famous dish all around China, but it’s usually cooked with super fatty pork. Since Lanzhou restaurants are Halal, they use lean, tasty beef instead, which actually tastes much better. 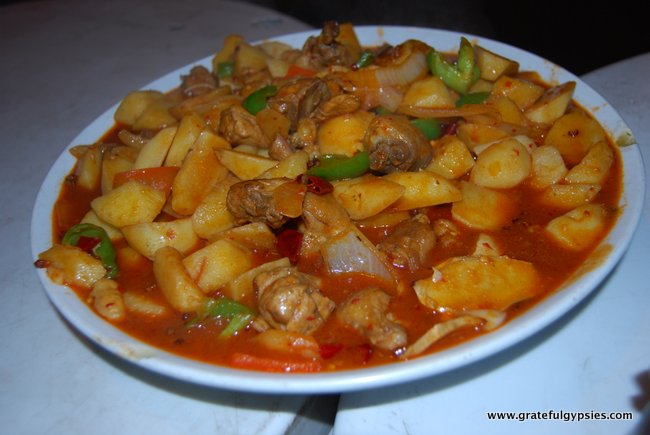 It sure is a big plate of chicken.

The shining star of this cuisine and the main event of any dinner in a Lanzhou restaurant, the “big plate chicken” is an epic dish. On one massive plate, you’ve got thick noodles, potatoes, onions, peppers, and diced chicken covered in a delicious, spicy gravy. It’s not just a clever name – it really is a huge plate of chicken. Usually, you can order either a small or a large portion. Unless you have at least 5-6 people, it’s best to go with the small.

Of course, you’ll want to wash this meal down with a few cold glasses of beer (啤酒 – pí jiǔ) and perhaps a few sticks of lamb kebabs (羊肉串 – yáng ròu chuàn) if you’ve still got room. After such a huge meal, you might just need to be rolled out of the restaurant.