The History of McDonald’s in China Posted by Ayana on Dec 4, 2017 in Uncategorized 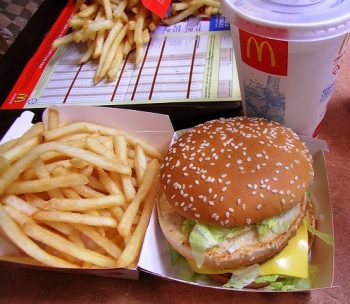 McDonald’s (麦当劳 Màidāngláo) was a late entrant into the foreign fast food industry in China. KFC, for example, opened in Beijing in 1987, while McDonald’s opened its first outlet in China only three years later. Unlike KFC who opened its first Chinese branch in the capital, Beijing, McDonald’s advanced from the south, opening in Shenzhen, a small city near Hong Kong. Shenzhen was declared a special economic zone in 1979, and was the first region to be opened to foreigners. The low taxes, the adequate infrastructure, and less interference from the government attracted McDonald’s to open their store in 1990 in Shenzhen, making China the 53rd country with a McDonald’s.

In 1990, McDonald’s opened its first restaurant in mainland China (in Shenzhen).

Two years later McDonald’s finally entered Beijing, and opened its (back then) largest restaurant in the world. The big golden arches (麦当劳的金色拱门màidāngláo de jīnsè gǒngmén) were seen from afar, and an inflatable Ronald McDonald (麦当劳叔叔màidāngláo shūshu) perched on the two-story restaurant, on Beijing’s main shopping street. The grand opening day in April 1992 was exceptional: more than forty thousand customers were served by nearly one thousand employees.

But two years after, McDonald’s was engaged in a land dispute against Beijing’s government. In question was McDonald’s 20-year lease and the city’s attempts to close the restaurant for a new super-sized shopping center. All the surrounding buildings were demolished, while the American restaurant was the lone building standing amid rubble. The legal battle lasted for two years, and ended when Beijing had agreed to pay McDonald’s a fee of $12.3 million. In 1996, a new outlet was opened 150 meters away from the old location, where it continues to operate today.

In 1992, McDonald’s opened its first restaurant in Beijing, China.

The new burger joint became an attraction as a place to taste not only the American food, but also the American culture. The western food, atmosphere, and style of eating attracted the locals and the domestic tourists. The company name and trademark was already known, and roused great curiosity among trendy customers. Although eating at McDonald’s was pricy, new restaurants appeared in Beijing one after another because eating there had become a social event and a culinary experience. By the end of 1996, there were 29 outlets in Beijing.

The world’s most famous arches are probably McDonald’s golden arches.

According to the Big Mac index of 2017, the Chinese Big Mac is much cheaper in comparison to the west, and even to countries in East Asia and South America. The average price of a Big Mac in America in July 2017 was $5.30; in Venezuela $4.06; in Japan $3.36; while in China it was only $2.92. But using the local currency, McDonald’s isn’t considered such a cheap option in China, considering the fact that the average price of a Big Mac is 19.80 Yuan. But McDonald’s offers delivery, 24 hours stores, free WiFi, and its familiar services, like drive-through and happy meal (开心乐园餐kāixīn lèyuán cān).

Over the years, McDonald’s prospered, establishing more restaurants around the world. In 2003, McDonald’s launched its first global advertising campaign. The chosen slogan was “I’m loving it” (我就喜欢wǒ jiù xǐhuān). Nowadays, this slogan is being promoted around 120 countries in the world. China is not only one of them, but the third country with the most McDonald’s locations, following the USA and Japan.

27 years after its first arrival to China, McDonald’s has approximately 2,500 branches spread all over the country. From the northern province Heilongjiang to the southern Hainan province in the South China sea. In quick calculation, it’s an average of 92 new restaurants every year, and counting. Just last August, McDonald’s announced its plan to open 2,000 new restaurants across China over five years, bringing the total to 4,500 stores by 2022.