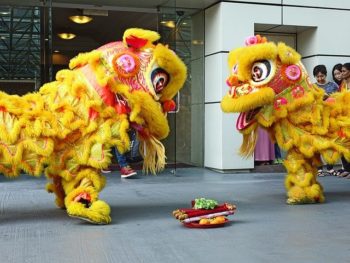 Photo by cegoh from Pixabay, CCO

The lion dance is a Chinese folk art.

The dance is operated by performers that mimic a lion’s movements in a big colorful lion costume. It is operated by two dancers, one of whom manipulates the over-sized head and the front limbs, while the other forms the rear end of the lion – the back and the hind legs. Together they simulate the movement of the lion dancing to the sound of clashing cymbals, resounding gongs, and beating drums. The loud music helps to coordinate the dancers, whose faces and bodies are hidden in the costume.

To the sound of a gong and drums the performers play the role of a lion. Each lion is usually performed by two people, one dancing the head and the other dancing the tail.

As demonstrated in the next video:

Although lions are not native to China, the ancients regarded them as symbols of strength and bravery. They believed the lion could drive away evil spirits and protect humans and animals. The history of the lion dance goes back thousands of years, passing down from generation to generation, creating a stylized dance for entertainment and spiritual purposes. The lion is considered an auspicious animal and its dance is performed as a means to chase away evil spirits and welcome in prosperous times. The dance is performed on big occasions, such as the Chinese New Year, and other festive celebrations, for good luck.

There are some rituals for the dance to bring wealth and good fortune. One ritual performed during the dance, for example, includes lettuce. The Chinese word for lettuce consists of two characters – 生菜 (sheng cài). By replacing only the second character in the duo to a different one but with very similar phonetics – 生财 (sheng cái) – the meaning changes to the verb to make money. Phonetically, the two words differ only by one tone. This is why in some dances the lion is fed with lettuce during the dance, and spits it back out to the audience to give them prosperity.

Another ritual is the 採青 (cǎi qīng). 採 (cǎi) means to pick; 青 (qīng) means green; together it’s translated as picking the greens. This ritual is popular especially during Chinese New Year, or at a business ceremonial opening. In this activity, the lion is not fed, but needs to hunt for his greens. The business would tie a red envelope filled with money, a reward for the dancers, to a head of lettuce, to symbolize wealth, and hang it high above the front door. The lion should reach the lettuce, eat it and spit out the lettuce leaves to bring prosperity for the business. In some cases, the lettuce is hung high above and the lion may dance on bamboo slits or human pyramids to fetch the food. In other cases, the greens are placed in a basin filled with water, and the lion needs to fish it out. Or in a pot filled with fruits to confuse the lion.

You can watch the lion in the next video fetch the lettuce hung above, and spit its leaves over the owner of the business, then run to him for a pat: