The Spring Festival Rush Posted by sasha on Jan 16, 2017 in Culture

It’s that time of the year again. With just a few days to go before the beginning of China’s most important festival – the Spring Festival (春节 – chūn jié) – millions upon millions of people are getting ready to head home. This annual mass migration is known as the Spring Festival rush (春运 – chūn yùn), and it is the biggest in the world every year. 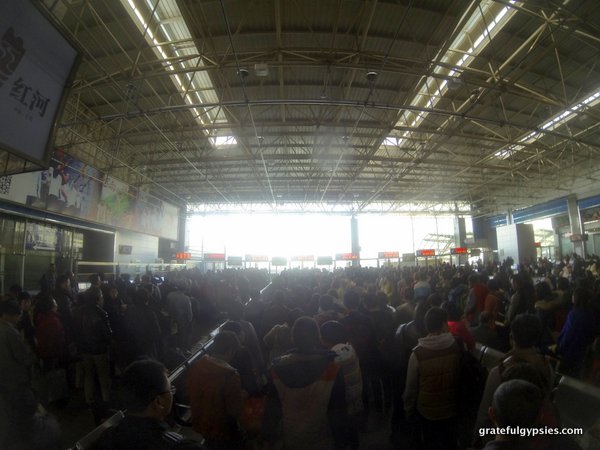 Although the festival itself only lasts for 15 days, this intense period of travel lasts for about 40. Last year, the number of passenger journeys during this period hit an astounding 2.9 billion – more than double the total population of the country. Just take a quick look at this aerial shot from the Guangzhou Railway Station last year and you’ll quickly realize how insane it is:

Getting a train or bus ticket becomes virtually impossible at this time, for a few reasons…

Thanks to education reforms, the number of students enrolling in university in China has also increased dramatically. Most of these college students (大学生 – dà xué shēng) end up studying far away from their hometown. As a former English teacher in a prominent university in Beijing, I can attest to that fact – my students came from all over the country. During the Spring Festival, all of these students go on winter holiday (寒假 – hán jià), which of course means heading back to their hometowns, often by train. At least for the students, they can get a jump on the working folks. 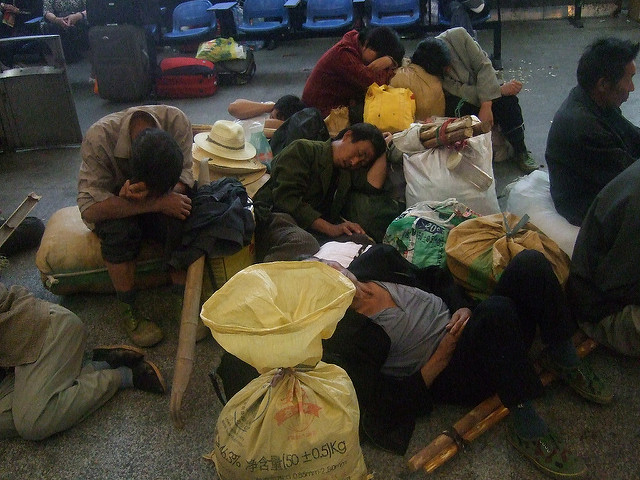 Migrant workers catch some z’s on the long way home. Image by Harold Groven from flickr.com.

The main reason for the madness of Chunyun is the fact that the millions of migrant workers (农民工 – nóng mín gōng) in the big cities do everything they can to make it back to their hometowns to ring in the New Year with their family. With more and more economic opportunities sprouting up in the big cities – especially on the east coast – the number of migrant workers has increased rapidly. During the Spring Festival, a reverse migration occurs, as these workers flee the smog-filled cities where they earn a living to return to their rural homes. As few migrant workers can afford the luxury of air travel, they all end up competing for coveted bus and train tickets. It’s not uncommon to find tons of people sitting on the floor or standing on train rides of over 30 hours. Spring Festival is all about family reunion, so everyone does everything in their power to not be left alone. Watch this clip of migrant workers and their family members talking about the importance of getting home last year:

The Spring Festival is one of two one-week holidays in China that are known as Golden Weeks (黄金周 – huáng jīn zhōu). Along with China’s National Day, the Spring Festival is a time when most people get a whole week off of work. During this time, many people in the mega-cities such as Beijing and Shanghai will also head back to various hometowns to visit relatives. With more and more Chinese entering the middle-class, tourism is booming in the country at that time. Of course, folks with more disposable income choose to forego the woes of domestic travel by instead jetting out to Europe or tropical destinations like Thailand or the Maldives.

Trailer for the documentary film “Last Train Home,” which is all about Chunyun.

With such high demand for tickets, an abundance of temporary ticket offices are set up around the holiday. Tickets also go one sale earlier than usual, and the offices keep longer hours to try and handle the massive influx of costumers. Of course, with so many people desperate for a ticket, the market for scalpers (黄牛 – huáng niú – lit. “yellow bull”) has been huge around the Spring Festival. In an effort to curb the illegal re-sale of tickets, China instituted a rule that says passengers must present a valid ID when purchasing a ticket and then show the same ID when checking in for a train. This has caused a drastic drop in the amount of scalpers and illegal tickets, and it has at least taken some of the misery out of the travel period. 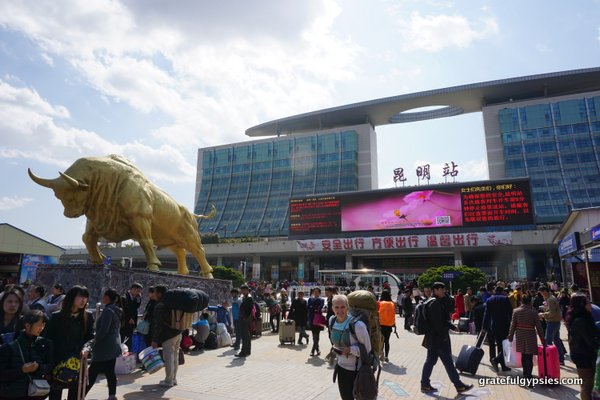 The Yellow Bull outside of Kunming Station. It doesn’t scalp tickets, thankfully.

As for yours truly, I learned long ago not to even attempt domestic travel during the Spring Festival. Unlike my students, I don’t have a Chinese family reunion to get back to. As such, I avoid train and bus stations like the plague for those two weeks and get the hell out of dodge by flying somewhere warm. Don’t get me wrong, I love the history and traditions of the Spring Festival; I’d just rather be sitting on a beach with a fruity cocktail in one hand and a book in the other than be fighting massive crowds of people to cram on an oversold train. I did manage to spend a few Spring Festivals in the country, including one in my friend’s beautiful village in Yunnan province. It was an amazing experience, aside from the copious amounts of baijiu that we drank.

Wherever and however you choose to spend the Chinese New Year, I’ll leave you with a common Spring Festival greeting – best wishes for a prosperous year (恭喜发财 – gōng xǐ fā cái)!