The Strong Stuff: BáiJiǔ (白酒） Posted by Stephen on Mar 28, 2012 in Uncategorized 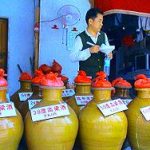 Seeing as we’ve already covered beer in a previous post, it’s time now to move on to the strong stuff and talk about China’s most popular spirit: 白酒 (bái jiǔ). If you want to experience drinking culture in China, baijiu will give you an epic crash course in boozing (not to mention a one hell of a hangover).

Baijiu is what Whiskey is to the Irish, Sake is the Japanese and Vodka is the Russians. And just like in all those cultures, when you drink baijiu, you drink with extreme purpose. So if the boss invites you out for some drinking and karaoke (卡拉OK), don’t worry about getting a little tipsy, because odds are you’re in for a wild, baijiu filled time. 干杯，朋友门！

Baijiu (also called 烧酒 shāojiǔ) quite literally means “white liquor” and is distilled from a variety of grains, most notably, sorghum. It comes in all sorts of bottles, big and small, and in plastic, glass, ceramic, and even stone containers. Baijiu can be clear in color or range from hues of yellow to red and brown.

Some baijius are flavored and have distinct fragrance, feel and taste. Like vodka and scotch/whiskey, baijiu is ranked in the “smoothness” of the drink and in purity and quality of distillation. Baijiu is also quite strong earning the moniker among Americans as “Chinese moonshine”.

Baijiu in it’s traditional form, will often have a snake or some kind of poisonous insect inside of it. These kinds of baijius are used as medicines or as aphrodisiacs. But modern day baijiu, that is all business. It has one goal and one goal only: to get you drunk or 喝醉了. 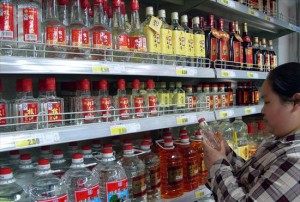 I like baijiu in all of its forms, whether it be a 7 kuai bottle of 二锅头 (èrguōtóu), or the truly fancy stuff that I’ve only had at weddings or among privileged military employees and costs hundred of US dollars. I will admit, though, that it is both an acquired taste and a way of life. Just give it a chance and let your palate adjust. Baijiu will grow on you. It just may take a little while.

Many 老外s that have their first brush with baijiu, barely can keep it down. I’ve heard it described as tasting like kerosene, rubbing alcohol and “dead brain cells”. Give it some time, and you’ll grow to like it. Just don’t make the same drinking faux pas as this laowai:

Needless to say, baijiu is very, very strong. Forget vodka, whiskey or gin, the average bottle of baijiu is much stronger and ranges between 42% and 66% (at least that’s the highest ABV I’ve had). It packs a punch to say the least, but tastes better with each little glass, so don’t get discouraged by the first sip. Just keep on slugging em down. After all, you don’t want to be rude. 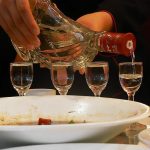 When drinking baijiu with friends, family or employers, it’s always best to adhere to the certain drinking etiquette’s or 礼节 (lǐ jié). In case you missed it, here’s a post on Drinking Culture with basic drinking etiquette and rules. Once you get down the basics, here’s some baijiu specific rules to get you through the drinking gauntlet that awaits:

First off, it is rather impolite to refuse a drink or cigarette, even if you don’t drink or smoke. I’ve found it’s much easier just to say yes to any offering that comes your way, because “when in China…do as the Chinese do”. If they drink, you drink. If they smoke, you smoke. Plain and simple. Why are the Chinese so liberal in their liquor? I see it as both a way of showing their magnanimity and benevolence towards those around them. What a remarkable culture!

Second, it doesn’t fall upon you to fill up your own glass, but it does fall on you to fill up your fellow drinkers‘ 杯子 (bēi zi) of cups. Because drinking culture is contingent upon communal drinking, everyone must be wary of the volume in each persons glass. So in essence, your drinking pace is determined by the people sitting at the table with you and vice versa. Mutually assured drunkenness almost inevitably follows.

Look again, because that's not wine.

Lastly, be mindful of your toasts, namely who you give them to, and how you toast. Make sure the host always gets due credit, but also make sure you toast anyone who is of a higher status or 地位 (dì wèi). Show respect to elders and be humble. How you toast can be a variety of ways, but here are the few that I’ve come across:

1) Keep your glass below the lip of the host and/or person giving the toast’s glass to signify being humbled in their honor.

2) Clink your glasses on the lazy susan (or sometimes table) instead of clinking actual glasses together.

3) Always, ALWAYS, 干杯 (gān bēi) and finish your glass. China knows all about busch-league and you will get called out for not keeping up with the group.

Once you have those rules down, you’ll be good to go. Enjoy baijiu and all the rowdiness that ensues. Last time I had a baijiu night with workers, I drank a coworker–literally–under the table. He went to make a retaliatory toast back at me, raised his arm and lost his balance, crashing epically to the floor under the table. The best part about that: my boss brought him a pillow which he placed under his head and then made a toast in honor of his passed out employee. 干杯！