The US Election in China Posted by sasha on Nov 3, 2016 in Uncategorized

Unless you’ve been living under a rock for the past year and a half, you’ve probably heard a lot about the upcoming presidential election in the US. It’s been all over the news, attack ads seem to run non-stop, and the whole world seems to be on edge about the result. Indeed, many other nations are watching the election closely. China may be thousands of miles away from Washington, but that doesn’t mean people aren’t paying attention to the election. Let’s take a look at how China is viewing the election and learn some useful vocabulary so you can attempt to talk about it with your Chinese friends or colleagues.

Chinese Opinion of the Election 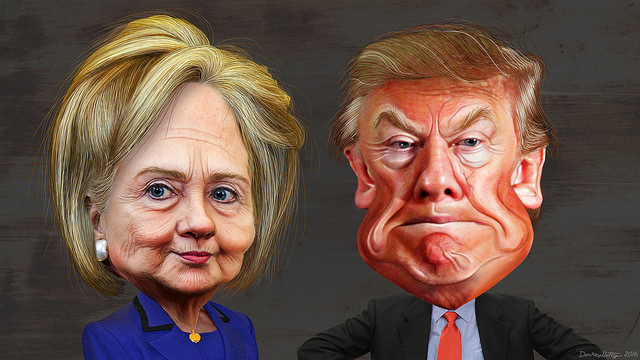 Image by Donkey Hotey from flickr.com.

Those in charge in Beijing tend to avoid commenting on the affairs of other countries. This should come as no surprise, as they often criticize other countries (especially the US) for commenting on the political situation in China. That being said, the government-run media has had quite a bit to say about the US election this time around. Under the pen name “Zhong Sheng” (中声 – zhōng shēng), meaning “Voice of China,” the People’s Daily ran an editorial calling the election “chaos” as it brought up the scandals surrounding both major candidates. As it has done before, Chinese state-run media uses the issues plaguing the US election to undermine the country’s two-party system and elections, thus making the argument for China’s one-party system:

“For a long time, the United States trumpeted the extraordinary excitement of its elections as a symbol of its superior institutions… It’s time for this ‘teacher of democracy’ to put away its super self-confidence and arrogance.”

So how about the common people in China? Surely not every Zhou 6-Pack has the same feelings as those running the Communist Party’s mouthpiece. According to a recent survey, 3,000+ residents in mainland China gave Hillary Clinton a 37% favorability rating compared with 22% for Donald Trump. As far as unfavorable ratings go, Clinton got 35% while Trump had 40%.

Perhaps thanks to the huge success of the television series “House of Cards,” more and more people in China are taking up an interest in US politics. While the debates were not shown on Chinese television, many watched them online with quick Chinese translations.

A podcast dedicated to the election, “Xuan Mei” (选·美 – xuǎn·měi), has been getting upwards of 70,000 listeners every month. Learn more about the podcast through this NY Times interview with its founder. Of course, plenty of China’s 1.3 billion people could care less about the US election. It’s funny to think that many factory workers who are currently churning out thousands upon thousands of Hillary Clinton and Donald Trump masks to be sold around the world couldn’t even tell you who they are…

Now to get you talking about the election in Chinese! Here’s some useful vocabulary:

You may be wondering why there are two different names for each candidate in the list. Most people refer to Hillary Clinton simply by her first name in Chinese. This is to distinguish her from her husband – former president Bill Clinton – as he is known simply as “Clinton” (克林顿 – kè lín dùn). As for Donald Trump, there are two different versions of his Chinese name. A quick Baidu search reveals that most simply refer to him as “Chuan Pu” (川普 – chuān pǔ), which is apparently the best phonetic translation of his name. If you’re sick of all this election hoopla, you’re not the only one. At least it’s almost over! Regardless of the outcome, at least we’ll always be able to laugh at this video of Trump saying China over and over again: