Our countdown of the Top 10 places in Beijing continues as we get closer and closer to #1. So far, we’ve explored the student haunt of the Wu, gotten artsy in 798, channeled our inner Chipster (Chinese hipster) in Gulou, and practiced tai chi in the local parks. Our next stop is all about the water, so let’s dive in! 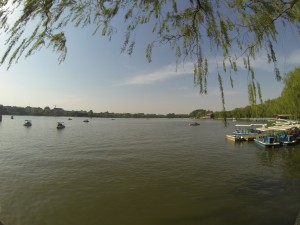 A stroll around Beihai Park.

Just northwest of the Forbidden City, you’ll find Beihai Park (北海公园 – běi hǎi gōng yuán). Literally meaning “north sea,” this imperial garden is one of the largest in China and is a prime example of traditional Chinese garden art. Although it’s very close to the Zhongnanhai (中南海 – zhōng nán hǎi) complex that houses many of China’s leaders, you don’t have to be a cadre to get into this little slice of paradise in the concrete jungle. All you need is 5 or 10 RMB depending on the season, and you’re free to wander and roam throughout this peaceful and tranquil park. 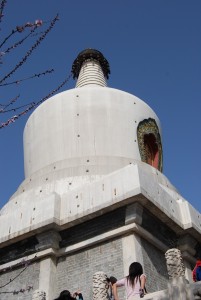 As previously mentioned in our #7 stop, local parks are a great place to experience Chinese culture. Since most people live in crowded high-rise apartment complexes with little or no common areas, parks are a place where people can get together and enjoy a variety of social activities. Strolling around Beihai, you may see people playing cards, dancing, practicing an instrument, or just chatting. You can rent a boat to cruise around the lake, or you can hike to the top of the hill and admire the White Dagoba. However you choose to spend your time here, a visit to Beihai is sure to revive your spirit and help combat the stress of big city life. 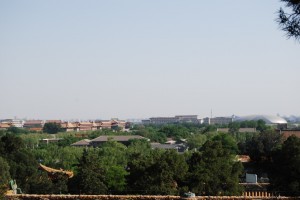 View from the top of the hill.

Just up the street to the north of the park, you’ll find three more man-made lakes. Although this area is collectively known as Shichahai (什刹海 – shí chà hǎi), most people simply refer to the largest of the three, the “Rear Sea” (后海 – hòu hǎi). While this series of lakes was once upon a time a playground for the royal family, it now primarily serves to entertain young Chinese locals, tourists, and expats. 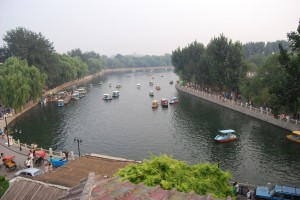 View of Houhai lake from above.

During the day, people come to Houhai mostly to enjoy the lake itself. In the warmer months, you’ll find tons of small boats out on the water. A good friend of mine once referred to the area jokingly as the “Beijing Yacht Club” and even had a t-shirt made. Bring a bag of Yanjing beers (燕京啤酒 – yàn jīng pí jiǔ), some snacks, and some portable speakers, and you’re all set for an awesome day out on the lake. When temperatures drop in the ‘Jing, you’ll find people ice skating or pushing each other around in silly chairs. Any time of the year, you can also rent a bicycle to cruise around the lakes and the surrounding hutongs (胡同 – hú tòng) yourself. If you’re feeling lazy, just pay a guy in a rickshaw to give you a tour. 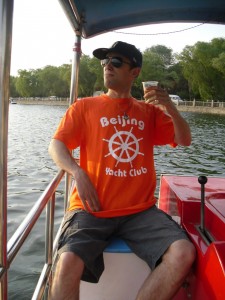 Enjoying an afternoon at the Beijing Yacht Club. 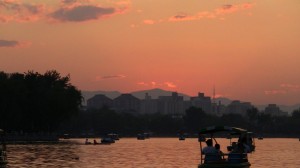 Whatever you do, make sure you stick around for sunset (at least on a clear day) – this is one of the best places in Beijing to watch the sun go down. Once it’s dark, the neon lights come on and the music cranks up. There are tons of restaurants and bars alongside the lakes, and they’re all competing for your RMB. Some personal favorites of mine are Hutong Pizza, Nuage Vietnamese, and the Roots Reggae Bar. Tucked away in the Dashibei Hutong just around the corner from Houhai, you’ll find 4corners. Try some of their incredible Vietnamese cuisine, grab yourself a creative cocktail, and get ready to rock out with live music. 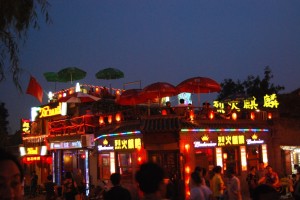 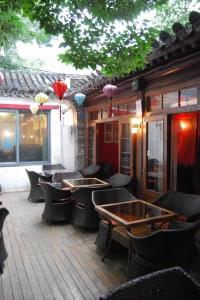 Chill out at 4corners.

As you can see, an entire day can easily be spent enjoying the various lakes in the center of the city. If it’s a nice day and you’ve got nothing better to do, just head to Beihai in the morning and then Houhai in the afternoon. You’ll get some exercise, you’ll experience local Beijing culture, you’ll have tons of fun on the lake, and you’ll wine and dine like an emperor.