Top 10 Places in Beijing – Gulou Posted by sasha on Aug 2, 2013 in Culture, Uncategorized

So far in our countdown of the Top 10 Places in Beijing, we’ve hit the student district of Wudaokou and the hip 798 art district. Speaking of hip, we’re going to the spot where hipsters love to gather in Beijing: 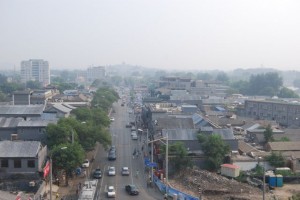 View from atop the Drum Tower.

This area of Beijing gets its name from the Drum Tower (鼓楼 – gǔ lóu) which still stands along the central axis in the old city. Across the square, you’ll also find the Bell Tower (钟楼 – zhōng lóu) here.  Long before the CCTV pants building and the other massive skyscrapers, these structures once dominated the skyline of Beijing.  Originally used as giant musical instruments, the two towers eventually became the city’s timekeepers.  Now, they serve as ancient relics of Beijing’s past.  Climbing to the top of either tower provides a glimpse into the neighborhoods of old Beijing, which are disappearing as the Chinese capital rushes to modernize.  A few times a day, you can catch a drum performance inside of the Drum Tower.  It’s a great show, and it’s definitely worth the price of admission. 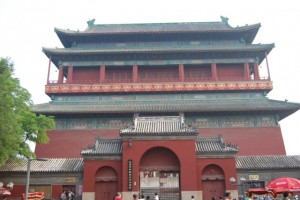 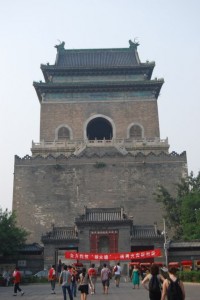 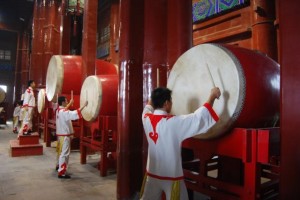 Drum performance inside the tower.

The Gulou area is much more than the towers, though.  The square in between them serves as a hangout for locals, who gather on a daily basis in the warmer months to do tai chi (太极 – tài jí), dance, or just play cards.  Once a year, a few weeks before Christmas, you’ll also find a crowd of drunken Santas spreading Christmas spirit(s) around Beijing. 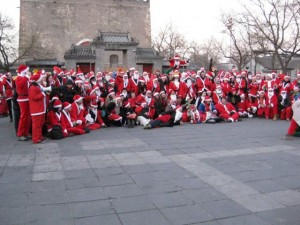 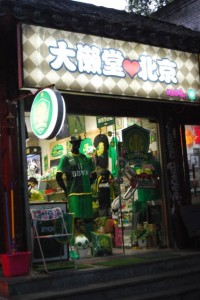 Get all your Beijing Guo An gear in Gulou.

Around the towers, you’ll find a bunch of restaurants, cafes, and bars, so it’s a great place to hangout and relax with a cup of coffee or an ice cold Yanjing beer (燕京啤酒 – yàn jīng pí jiǔ).  Some popular places to go include the Sculpting in Time Cafe and the Drum and Bell bar.  The latter features a nice rooftop area that is great for summertime boozin’ in Beijing.

A stroll along Gulou East Street (鼓楼东大街 – gǔ lóu dōng dà jiē) is a great way to spend an evening as well.  Up and down this road, you’ll find tons of different shops, from local clothing stores, to retro accessories, to a vampire themed spot where you can drink sugary “blood” drinks from IV bags.  Show your real Beijing spirit by loading up on gear for the local football club, the Guo An (国安 – guó’ān). Don’t be surprised to see plenty of Chinese hipsters (or Chipsters as we like to call them) on your walk, with their multicolored fixed gear bikes and glasses without lenses. 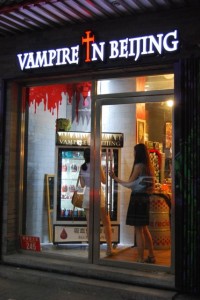 Vampires are all the rage these days. 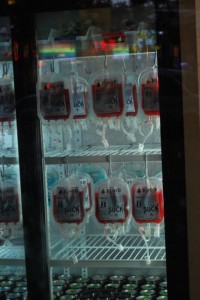 Blood drinks in the vampire shop.

Amongst Beijingers, Gulou is known as the place to rock, and for good reason.  There are a bunch of music shops where you can pick up an axe and rock out, and there are also quite a few venues.  You’ll find live music just about every night of the week at Temple bar, with both local and foreign bands spanning many different genres.  If you’re more into electronic music, you can head downstairs to Dada.  They host monthly drum & bass parties that go all night long.  Finally, there’s Mao Live House, named after the Chairman himself.  This place turns it up to 11 all the time, so be prepared to throw up your rock hands \mm/. 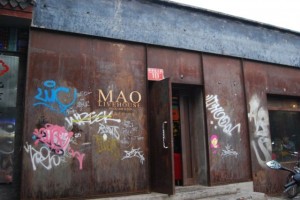