Top Fears of Chinese People Posted by sasha on Oct 14, 2015 in Uncategorized

With Halloween fast approaching, what better time to talk about fears? Whether we like to admit or not, everyone has fears. Some are freaked out by spiders, others are spooked of heights, and many of us are downright terrified of speaking in public. So, what exactly are Chinese people afraid of? While it’s hard to make a blanket generalization about the fears of a country with 1.4 billion people and counting, Chinese search engine Baidu tried to do just that a few years back. By reviewing 20 million searches related to fear, they generated a list called “What are Chinese people afraid of?” (中国人怕什么? – zhōng guó rén pà shén me). Let’s take a closer look at the results to see what the world’s most populous country is scared of: 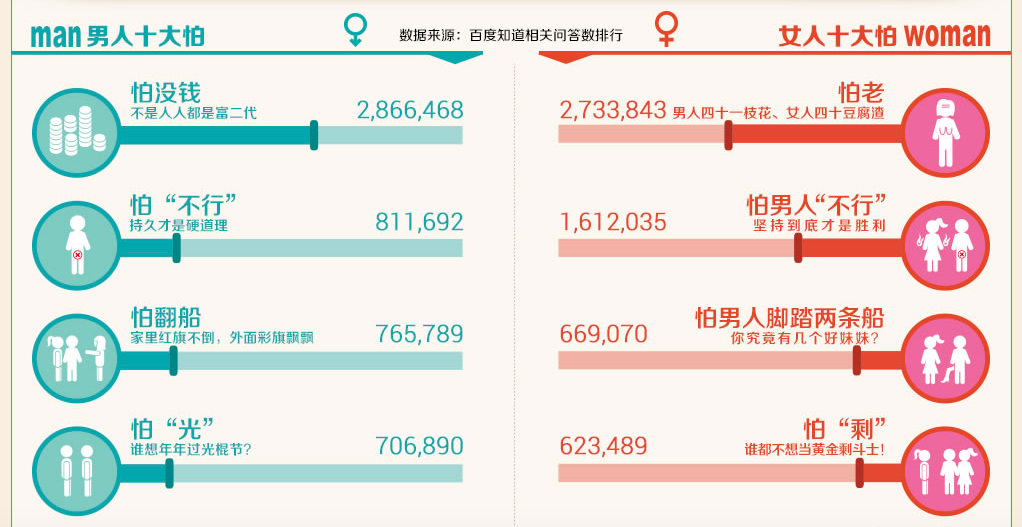 Some of the top fears.

First of all, a list was compiled of the Top 10 Fears for both men and women? Care to guess what they were for each? I’ll give you a clue – the top fear for men didn’t even crack the list for women, and vice versa. Obviously men and women have very different fears in China. So, which fears topped the lists of men and women, respectively?

Around 2.9 million questions show that men fear a lack of financial stability, while over 2.7 million from women show their fears of aging. This should come as little surprise, considering that the modern-day definition of success in China for a man involves getting rich, while for a woman it means looking young and beautiful. Perhaps that old Chinese saying that, “At 40 a man is a flower, and at 40 a woman is tofu” (男人四十一枝花，女人四十豆腐 – nán rén sì shí yī zhī huā, nǚ rén sì shí dòu fu) also has something to do with the ladies’ fear of getting old. Interestingly enough, the #2 fear on both sides was impotence. Also, men are afraid of their partner finding out about an extramarital affair, while women are afraid of said affair happening in the first place.

Big differences when it comes to love.

About 700,000 questions were asked about “how to find a girlfriend,” while that number was around 620,000 for “how to find a boyfriend,” showing that men are more afraid of being single than women. There was a big gap when it came to anxieties about tying the knot – only 30% of men fear marriage compared with 70% of women. From these results, we could say: 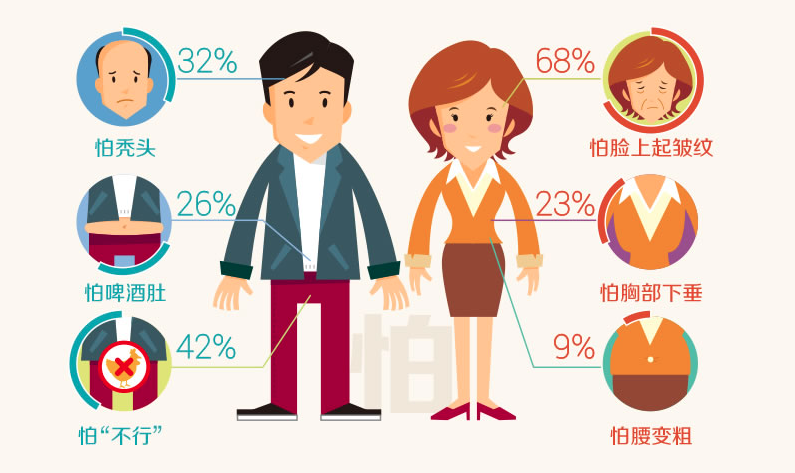 When it comes to men, their biggest fear regarding their body is that their “little brother” stops functioning properly (42%), while for women wrinkles top the list (68%). Men also fear going bald and getting a beer belly, while women are scared of sagging breasts and gaining weight. 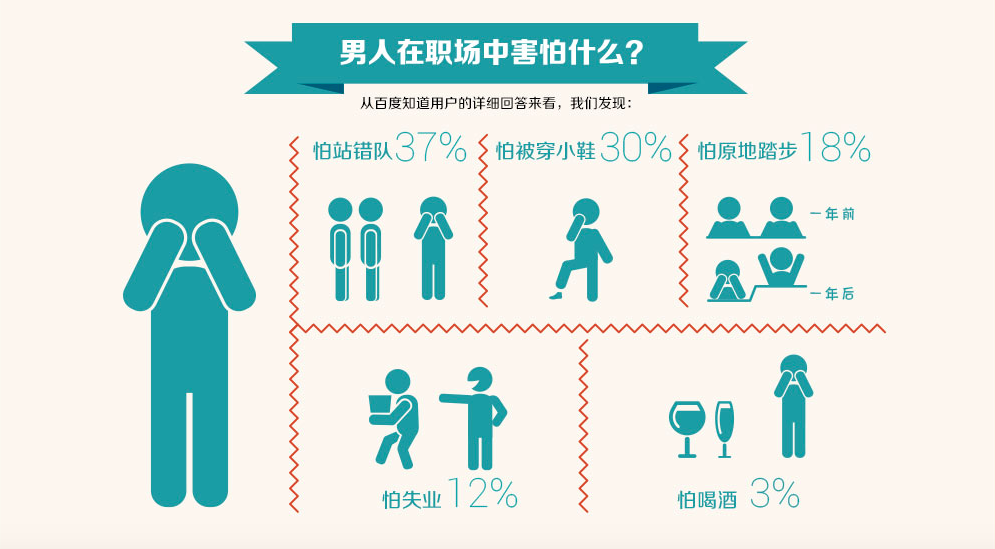 As far as work related fears go, men are most afraid of making unwise choices at work (37%), while women fear getting pregnant the most (38%). Men also fear not making progress, losing their job, and drinking alcohol, which should come as no surprise to anyone who’s ever been a part of a Chinese banquet. A close second place for women is getting hit on by a superior at work, although other than those two it seems as if women have far less fears related to work.

For a more personal look at fears some Chinese people have, check out this YouTube video with real live people rather than search engine stats: