Why Spring Festival Sucks Posted by sasha on Feb 19, 2015 in Uncategorized

It’s that time of year again – fireworks are going off everywhere, auspicious couplets are hanging outside of doors, children are counting up their lucky money, and millions of people are moving around the country to see their loved ones. Ah yes, it’s Spring Festival (春节 – chūn jié) in China once more. It’s both a happy and stressful time here. People enjoy having time off, but hate having to fight the crowds to get home. While it’s great to get back to your 老家, it’s tough if you come home empty handed – that is without any gifts or a significant other to introduce. We’ve covered many aspects of the Chinese New Year here over the years, but one thing we’ve never really touched on are the downsides of this important holiday. While I hate to be a Debbie Downer, it’s important to tell both sides of the story. That being said, here are a few reasons why Spring Festival sucks: 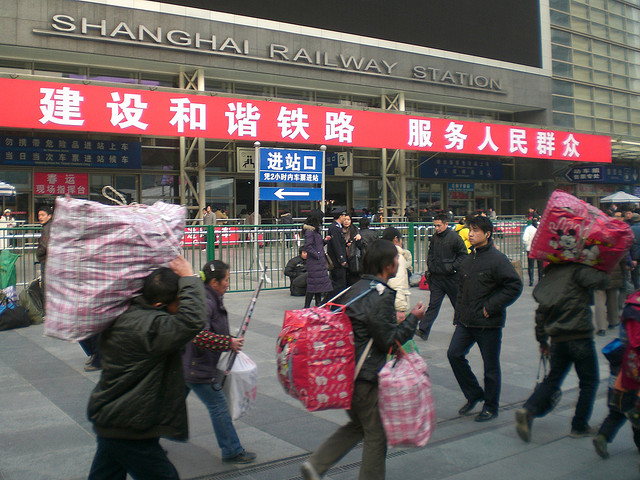 Image by Remko Tanis from flickr.com.

As the holiday approaches, millions upon millions of people move around the country trying to get home in time to pass the year (过年 – guò nián). These days, most people live in the mega-cities of China (think Beijing, Shanghai, Guangzhou, etc.), but they still return to their much smaller hometowns for the Spring Festival. The result is an absolute clusterf**k at train and bus stations, airports, and on highways all over China. Although the holiday itself only lasts for 15 days, the Spring Festival rush (春运 – chūn yùn) lasts for 40. Last year, Chinese people made 3.6 billion combined trips during this intense travel period. On the first day of chun yun this year, over 1 million flights were taken. Stop and think about those numbers for a minute, and then picture yourself trying to push through those kinds of crowds. It’s the biggest mass migration of people on planet Earth every year, and it only gets bigger.

While numerous changes have been made in recent years in an attempt to make this travel period less terrible for all, it’s still pretty awful. Ticket offices stay open longer and start selling tickets much earlier than usual. Online ticketing has taken off as well, so there’s no need to line up in a ticket office. In an effort to curb scalpers (黄牛 – huáng niú – lit. “yellow bull”), people must now present a valid ID when buying a ticket and then show the same ID at the station. Extra trains and flights have also been added to handle the demand. All of these measures have indeed helped, but the situation is still far from desirable. Even if you do get a ticket, you might end up standing on a crowded train car for over a day. Imagine how cheery and pleasant you’d be when arriving home after 30+ hours of being vertical on a Chinese train, especially when considering that you’ll have to do the same thing a week later to get back. Chun Yun is so intense, in fact, that a movie was even made about it. It’s called “Last Train Home” (归途列车 – guī tú liè chē), and it’s a fantastic film that shows how China is a nation caught between its rural past and industrial future.

The trailer for “Last Train Home.”

If you’re interested, we’ve got more information on the Spring Festival rush. 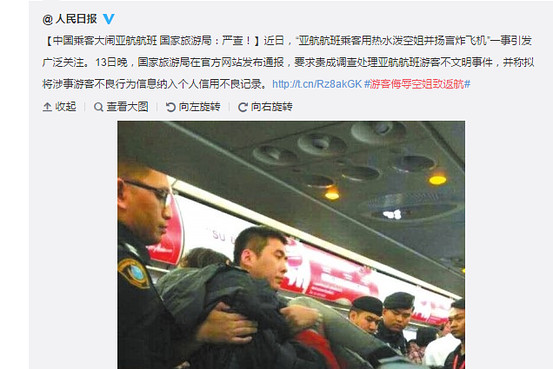 The People’s Daily Weibo page shows an incident on an Air China flight.

In recent years, there have been many well-documented incidents on airplanes involving Chinese passengers. There was that woman who threw hot water on an AirAsia flight attendant after her boyfriend demanded it so he could get going on his instant noodles before takeoff. Then there were the two guys on separate flights who decided to open the emergency exits – one to get fresh air and one to beat the crowd getting off the plane. Then there were the ladies who literally started a brawl on an Air China flight over a crying baby. Such behavior has “severely damaged the overall image of Chinese people,” according to the China National Tourism Administration. With huge crowds and lots of potential delays looming during the Spring Festival rush, it would be very surprising if there weren’t more similar reports in the weeks to come. Perhaps it’s behavior like this that has helped the Chinese dethrone Americans as the world’s most hated tourists. As an American, this is one instance where I’ll happily chant, “We’re number two!”

For young Chinese who have migrated to the big cities to work, there’s a certain amount of pressure that comes along with returning home for the New Year. It’s pretty bad to not make it back for the Spring Festival; it’s almost worse to show up empty-handed. If you’ve left the village to make it big in a place like Shenzhen, it’s embarrassing returning home without gifts to prove you’re living a successful life.  Red envelopes need to be stuffed, huge dinners need to be had, fireworks need to be blasted off, and of course copious amounts of smoking and drinking need to be done. All of these things come at a price – one which many migrant workers simply cannot afford. Rather than lose face by showing up with nothing, many people choose to make up excuses as to why they can’t get home for the big day. In the run-up to the holiday, you have to be extra careful with your belongings when out in public as bag-snatching and pick-pocketing incidents skyrocket with desperate people trying to fund their trip home.

It’s not just gifts that you’re expected to bring home, though. Especially for young Chinese, there’s a lot of pressure from parents to show up with a significant other in tow. Casual dating is not big amongst the old-school class in China, and most expect a daughter to come home with a future husband for the New Year. Of course, not everyone finds love in the city – work dominates life and there’s little time left to socialize and date. Ever the entrepreneurs, many young Chinese men have even taken to renting themselves out as fake boyfriends for the holiday. That’s right, plenty of young Chinese women actually pay guys to come to their hometowns and pretend to be a boyfriend for a few days. 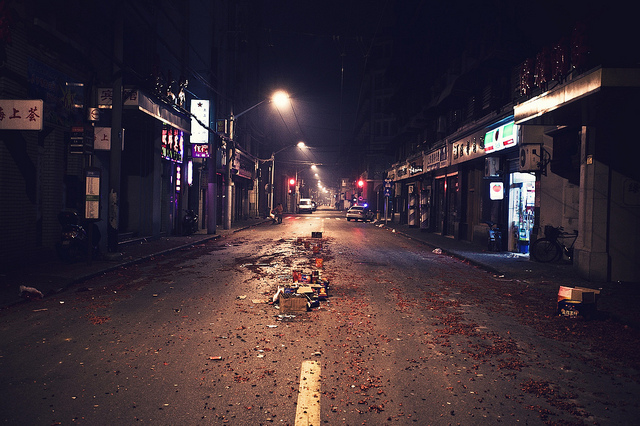 Don’t get me wrong, I love fireworks (烟花 – yān huā). The 4th of July is one of my favorite holidays, partly because of the grand fireworks displays that go on across the US. I also love a good Friday night baseball game followed by a colorful display of fireworks. We have China to thank for the gunpowder that powers them, but we also have China to hate for blowing them up non-stop for 15 entire days. Whether it’s early in the morning or late at night, there’s sure to be a string of firecrackers going off somewhere in China. The smog in cities like Beijing only gets worse with all of the smoke, and the usual cacophony of noise is only increased. It’s fun for a few days, but it gets old pretty fast. By the time the Lantern Festival (元宵节 – yuán xiāo jié) rolls around, everyone heads out to set off their remaining fireworks before they become illegal in the city. Sitting in my Beijing apartment one year, it seemed a warzone just outside of my door. See for yourself…

The warzone – AKA my apartment complex – on Lantern Festival.

There you have it, folks. While the family reunion, dragon dances, and CCTV New Year’s Gala may be great and all, there are quite a few reasons why Spring Festival sucks.