You Speak Chinese Very Well! Posted by sasha on Jan 22, 2015 in Uncategorized

Chinese is a difficult language to master, and nobody knows this more than the Chinese themselves. As such, people in China are often quite impressed to hear foreigners speaking their language, even at the most basic level. If I had a dollar for every time a Chinese person told me how great my Mandarin is, well I probably wouldn’t be sitting here in Kunming at the moment – I’d be relaxing on an island somewhere counting my money in very mediocre Chinese. Having grown up in the States – where let’s be honest, people aren’t exactly patient when it comes to communicating with non-English speakers – the constant praise and encouragement from locals pushed me to study harder and practice more. It’s hard to imagine an American telling a foreign tourist, “Wow! Your English is so great!” after they simply said “Hello.” Throw out a solid “你好” in China, though, and you’re sure to get props for it. How do you know when someone is complimenting you, and what should you say in return? Here are some common ways that Chinese people will elevate your dismal Chinese language abilities: 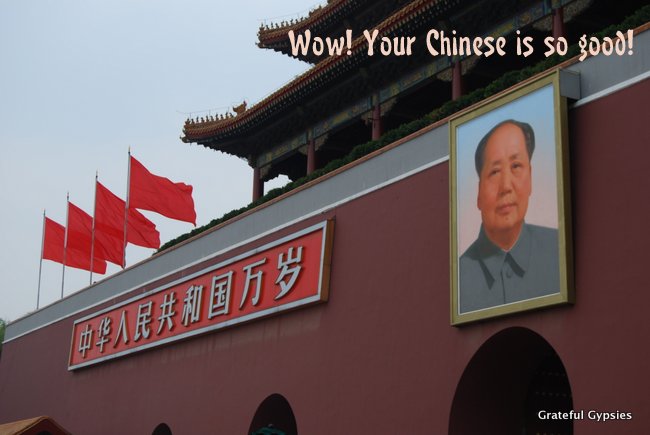 “Your pronunciation is very standard.”

Let’s look back at those examples to point out a very important and useful grammatical structure. In these sentences, we see the particles 的 and 得 – both are pronounced as “de” in the neutral tone. For beginners, it’s easy to confuse these two characters. To help you better understand these two characters and how they are used, here’s a brief description:

This is actually the most common Chinese character in use today, so it’s a good one to learn. This character functions just like ‘s (apostrophe + s) in English in that it shows possession. The formula for using it is “Subject + 的 + Object.” Here are a few examples:

Mike Laoshi teaches you possessives in his garage.

It’s important to note, however, that this possessive form is used much more in Chinese than in English. For example, in English we just say “red car,” but in Chinese you need to say “red + 的 + car.” In this way, the character 的 links attributes to things – color, size, and so on. Just look at a few examples:

This one is more difficult to understand and put to use properly. In Chinese, this particle is used as a part of verbal complements. For you grammar newbs out there, a complement comes after the verb and adds more information about it. Just look at the example we used above – “You speak Chinese very well.” In this sentence, we use the particle 得 to add more information to the verb “speak.” This particle helps us tell how somebody does something. Here’s the formula you need to use for a sentence:

Not that we can add the character 不 to make the sentence negative. Let’s look at a few examples of both positive and negative sentences using 得:

China is the best at playing ping pong.

If you can understand these examples and the basic difference between the two particles, then you’re doing well. Keep on practicing and using them in your daily life and you’ll get them in no time.

How to Respond to Compliments

An important part of Chinese culture is being modest, so you don’t want to respond to a compliment by saying something like, “I know, my Chinese is totally awesome!” Although there’s technically nothing wrong with simply saying “thank you” (谢谢 – xiè xiè) in response, there are better ways to deflect the compliment:

For more practice, there’s a great video from the Learn Chinese Now YouTube channel that goes over responding to compliments:

Of course, there are plenty of other ways to respond to compliments. It all depends on the situation, the topic, and how well you know the person you’re talking to. The guys over at YoYo Chinese penned this really detailed article on “5 Ways to Deflect a Compliment in Chinese” if you’d like to do a bit more research.