A Canadian in Denmark Posted by Bjørn A. Bojesen on Oct 19, 2011 in Uncategorized 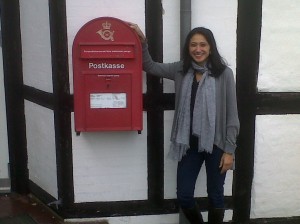 Jennifer is a Canadian, but has chosen Denmark as her new home country.

Wow, that is a long way to travel! What brought a Canadian like you to Denmark?

Well, I married to a Dane, that’s why. I met him fourteen years ago. Since then we’ve been travelling a lot, but our home base, you could say, is here in Denmark. We settled down here a year and a half ago.

Where do you live?

Quite another thing than Calgary, I presume!

Yes, coming from a town of over a million to something about 600 is quite a change. But it’s a very quiet town and there’s a lot of families in the area, and it has many facilities. It’s very close to the national park called Mols Mountains [Mols Bjerge] – which are not really mountains, but Danes call them mountains!

Had you been to Denmark before moving here, or was it all new to you?

Do you speak Danish?

Yes, I do. A little bit. I can get by with my Danish, but of course pronunciation is very difficult for foreigners.

How long time did you spend studying Danish?

In total I would say 6 months. 3 months when I met my husband, 3 months about a year and a half ago.

OK, I cheated: I actually heard you speaking Danish before. And you did it really well!

I think for people who speak English as their native language Danish is much easier to learn than for people who speak other languages. So that’s one thing. I guess also my Danish improved quite a bit after we had our son. Because then we spoke Danish at home. Otherwise my husband and I usually speak English together. So I think that’s why my Danish has also approved a lot over the past seven years!

Stay tuned for the next part of this interview with Jennifer!