Living among Danes Posted by Bjørn A. Bojesen on Oct 21, 2011 in Uncategorized 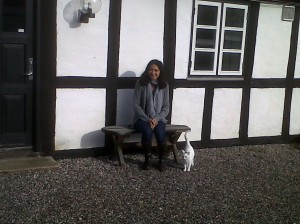 So, Jennifer, you said you were ’positively surprised’ by Denmark? What’s the best thing about living here?

Definitely not the weather! I guess I’d say the best thing – and I think many people agree – is the social wellfare system… Denmark has also a very good educational system and that was one of the main reasons that brought my husband and me back to Denmark. We wanted to give our son a good education.

I can’t say that, but look: Denmark is not much better… (She laughs.)

Last year it was down to minus 18 degrees of Celsius!

And I’d say the winters in Calgary are better, because there’s a lot more sunshine than here. But there’s also some charming things to the weather in Denmark. You’ll find that in Denmark people talk a lot about the weather!

True enough; we even had a blog post about that!

I can see why.

How are the Danes?

I guess the first thing that comes to my mind is – they’re very open. I think Denmark is well known around the world for being a very open society. On the other hand it can be difficult for a foreigner to get below the surface. In my experience it is very difficult to get to know Danes! The friends they have are often people they’ve known for many years. In Canada and the States, I think, it’s much easier to make friends, maybe on a more superficial level, but it is easier than in Denmark.

I do think Danish people are very kind and fairly tolerant. But it is a very homogenous society also, so perhaps that’s why it can be difficult to come from the outside and get fully integrated into the Danish society.

What do you think we as Danes could learn from you as Canadians?

To be a bit more tolerant? Well, I won’t say Canada is a perfect country… We also have issues with diversity and integration… But I’d say that as the world gets more interdependent Denmark has to be more open and relate to the rest of the world…

Have you got any advice for people wanting to learn Danish?

Denmark is an interesting country, it is changing, and it’s a very modern country. And it’s a very beautiful country! So, please come and visist Denmark! If you ever have the chance!

Thank you very much!