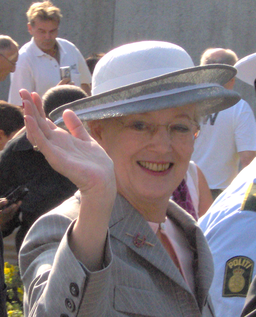 January 15th, 1972, Christiansborg Slotsplads (Christiansborg Palace Square), central Copenhagen. A multitude of people – young and old, men and women – have gathered in front of the palace section used by the Royal family. (Another part of Christiansborg Slot [Palace] houses the Danish Parliament.) Surprisingly many carry small Dannebrog (the name of the Danish flag) in their hands. All eyes are directed towards the balcony. When does she come?
At last Margrethe, a quiet 21 year old interested in art and archaeology, appears at the gates. Still saddened and shocked by her father’s death yesterday, she wears a simple robe adorned with a white ribbon. She looks grave and solemn as she enters the balcony, followed by Prime Minister Jens Otto Krag. High above the crowd Mr Krag, through a bouquet of large microphones, declares that Denmark has now got a new monarch, the second queen in the long line of Danish kings, Queen Margrethe II.

Well, I wasn’t there, but this is how I imagine it must have been, looking at the old photos that are cluttering the newspapers these days – in celebration of Margrethe’s 40 years on the throne. Living in one of the world’s oldest kingdoms, which at the same time is one of said world’s most secular countries, many Danes have a complicated relationship to their Queen. On the one hand, a lot of people think that the (symbolic) monarchy is an old-fashioned and expensive institution, which ought to be abandoned. On the other hand, an awful lot of people really like the Queen as a person and a representative of Denmark, and wouldn’t really like to see her replaced by a president.

Margrethe Alexandrine Þórhildur Ingrid was born in 1940, and is married to French Duke Henri Marie Jean André, popularly known as Prins Henrik (Prince Henry). They have the sons Frederik and Joachim, who are married to Mary (Australian) and Marie (French), respectively. Together with the Queen’s various grandchildren and Joachim’s ex-wife Alexandra (of Hong Kong), they provide the media with stories and the souvenir shops with postcards. Some people feel very connected, almost related, to the Royal Family.

The Queen is a very creative lady, who has had her paintings shown at several art exhibits. She even illustrated a Danish edition of Tolkien’s famous The Lord of the Rings (Ringenes Herre in Danish). On a more trivial level, The Queen is also known for her excessive consumption of cigaretter. Her famous nytårstaler (New Year speeches) always end in Gud velsigne Danmark – God bless Denmark.