Studenterhue Time Posted by Bjørn A. Bojesen on Jun 30, 2012 in Uncategorized

First of all, I’m happy to tell you that some friends helped me create a video illustrating the D-R-G pronunciation post. Go check it out! 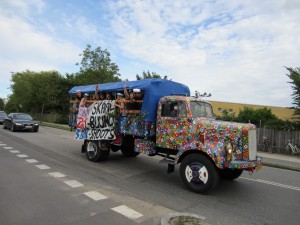 Studenter driving past. Unfortunately, a photo can’t capture the sounds of screaming, laughter and honks…

Secondly… Wait a second, I can’t concentrate, a lastbil (lorry) full of studenter is driving past my house; through the flower-decorated scaffold that prevents the 18-year-olds from falling off the truck body, the young men and women are screaming with joy and excitement, whistling whistles and honking horns! It’s June, and it’s time for the studenter celebrations.

This needs some explanation… In England or the US, a ’student’ is usually someone who’s studying at a school, college or university. Well, the word – with the pronunciation ’stoo-DENT’ – may mean that in Danish too! Most often, however, someone studying, say, medicine or Danish, is called a ’studerende’ [stoo-DEH-or-neh] (literally ’a studying one’).

What about student, then? In Denmark, the ”upper secondary school” is called a gymnasium (most people just say gymnasie, without that Latin -um stuff). If you’re considering a higher education at a college or a university, this is the school to attend. Most people start at 15 in the class called første G (first G), and finish three years later in tredje G (third G). Those who pass the studentereksamen (final gymnasium exam), are called studenter.

Being a student is great! You get a white studenterhue (”passed-the-exam cap”), that you proudly wear everywhere in the weeks following the final exams in early June. The school has a formal celebration for you, where all the teachers and pupils join each other in the group dance called lancier (pronounce [langSHEH], the name is French). After three years in the system, you’re free! You’re free, and you did it! You passed the exams, you proved to the world and yourself that you are someone! Now the whole world lies open, with endless possibilities ahead… But before that, of course, it’s time to take an øl.

We haven’t talked about Danish compounds yet, but in most of the cases, you just lump two words together: vand ’water’ + flaske ’bottle’ = vandflaske ’water bottle’. In this respect, the word student belongs to an extremely small group of words that take an –er ending: student + hue ’cap’ = studenterhue.