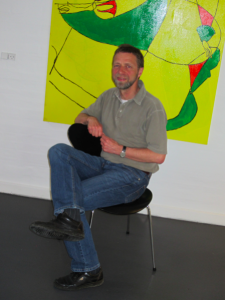 Danish design is renowned all over the world. I met Jørn, who knows something about Danish chairs, tables and sofas…

Well, I used to be the editor of a magazine for the Danish furniture industry. I did interviews with some of the young and upcoming designers and visited furniture fairs. It was really interesting to hear their thoughts!

I think it’s got something to do with the way shape and function are linked. I know this from the field of møbeldesign (furniture design), but I think it’s true for other kinds of Danish design as well. Danish  furniture design reached international fame in the 1950’ies, with names like Hans Jørgen Wegner, Børge Mogensen, Arne Jacosen, Finn Juhl, and Poul Kjærholm some years later. In all their møbler (pieces of furniture), form og funktion (shape and function) form a synthesis.

Yes, the pieces that people all over the world fell in love with in the fifties, are very lette og lyse (”light and bright”). Like the wooden stole (chairs) of Wegner and Mogensen. It’s all minimalism, functionalism.

I think this movement got a lot of inspiration from Kaare Klint, who became the leader of a prestigious design school in 1924. He was the first møbeldesigner who saw the møbel primarily as a tool. He was far ahead of his age.

Wegner and Mogesen were working for Den danske brugsforening (a group of shops where the customers are also the owners). They were asked to make a series of plain, cheap, useful møbler that everybody could afford. That’s how many of the most famous products were created!

So, these are the chairs and tables found in the homes of ordinary Danes?

Not anymore, I’m afraid! Today the ”moderne klassikere” (modern classics) are quite expensive. On the other hand, they’re still very popular. Many young people would rather buy a classy Wegner chair than a stol designed in 2013…

Okay, so if you’re a normal family without a lot of cold cash, I guess you shouldn’t look for Danish design when you go møbel-shopping?

You could visit Ikea! They’ve kind of continued the Danish style. It’s a Scandinavian style, after all. Plain and no frills. Many young designers from Denmark are actually working for Ikea.

I’d like to add that young Danish designers often have a hard time breaking through. The heroes from the 50’ies and 60’ies still loom large. For some years the Danish industry was a bit stuck in the past and lagging behind countries like Italien and Holland. But now, things are happening again…

What’s a good piece of furniture to you? 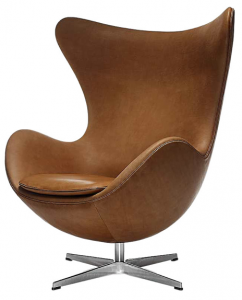 If it’s a chair, it should be something that’s really good to sit in. It should also be nice to look at. I really like the steel and leather works of Poul Kjærholm, as well as many of the wooden pieces by Finn Juhl. And Ægget (the egg) by Arne Jacobsen – that’s just an amazing shape. It’s like it’s inviting you to sit down!

Denmark is known as the land of hygge – that pleasant feeling of just being relaxed and comfortable and having a good time with your friends and family.  Can Danish furniture be hyggelig as well?

Yes, indeed! Wegner made some big lænestole (armchairs). There is one called bamsestolen (the teddy bear chair). That sounds pretty hyggelig, doesn’t it?

Do you think a good piece of Danish furniture should be hyggelig as well as plain?