Danish Oops! moments Posted by Bjørn A. Bojesen on Jul 31, 2013 in Uncategorized 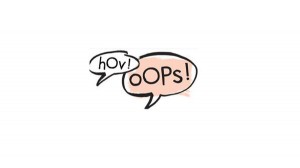 This month, several of my fellow bloggers here at Transparent Language have been writing about funny mistakes they’ve made while trying to communicate in a foreign language. As a native speaker of Danish, I’m afraid the bits I could share with you wouldn’t be very “juicy” – the few mistakes I can recall are all due to me having lived an “awfully” long time among our Norwegian brothers and sisters! 😉 (Like saying Har alle fået sine billetter? instead of the correct Har alle fået deres billeter? when asking if everybody “have got their tickets?”)

So, I’d rather share with you a few potential pitfalls, small details that you should keep in mind when exploring the flat Danish landscapes and chatting with the hyggelig people.

Getting the vowels right

Danish has more vowels than any other European language, and it’s therefore a good idea to spend some time making sure you don’t pronounce by (city) as bi (bee) or mene ([to] mean) as mine (mine). There’s a joke about prins Henrik, the Danish Queen‘s French-born husband, who likes to go hunting. Once, having returned from a hunting trip, he was supposedly interviewed by a reporter. “Henrik” wanted to say: Vi skød en ræv (We shot a fox). However, according to the joke, what he actually said was: Vi sked en røv (We sh*t an *rse)…

Be aware of the stød

The stød (thrust) is a kind of small hiccup that is largely responsible for making Danish sound … Danish. Normally, you can get along very well without it (but everyone will immediately notice you’re a foreigner! 🙂  ). In a few words, though, it does make a difference.
Bønner (without stød) means “prayers” or “beans”, while bønder (pronounced in the same way, but with stød) means … “farmers”. And if you want to talk about your mor (mother), make absolutely sure you don’t throw in a stød! That would make it sound like mord (murder).

Turning numbers in your head

Have you ever made an embarrassing mistake while speaking Danish? Please share in the comments section. Danish is a difficult language, so there’s nothing to be ashamed of! 🙂