Danish Newspapers Posted by Bjørn A. Bojesen on Feb 25, 2018 in Uncategorized 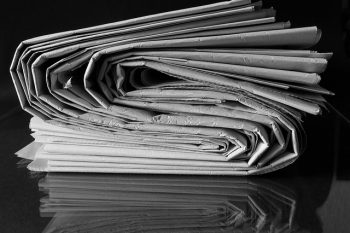 (Free picture from Pixabay. No copyright.)

You can very easily find danske aviser (Danish newspapers) by searching online. Sometimes, though, you might prefer papiraviser (”paper newspapers”) instead of netaviser (online newspapers)… It might for example be a little bit difficult to fold your computer into an avisbåd (newspaper boat)!

If you’re in Denmark, you can generally buy aviser in kiosker (kiosks) and supermarkeder. Go check if you understand overskrifterne (the headlines)! 🙂 The easiest headlines for language learners usually are in tabloidaviserne (the tabloids), which also have a lot of fotos to help you understand the context. If that’s not your thing, buy a more ”serious” newspaper and jump straight to tegneserierne (the comics) or the sudoku when it gets too difficult! 🙂

Danske aviser are either lokal [lohKAL] or landsdækkende (countrywide). Also, they very often are linked to a specific kind of politik (politics) – some are a bit more right-wing or ”liberal” and some are a bit more left-wing or ”socialist” (it’s hard to translate directly as the parties in Denmark don’t match those in the US, for example). The differences are not that huge, though, and I doubt it will bother you when you try to spell your way through simple articles! 🙂 Here are some of the most common newspapers to check out:

• Ekstrabladet is an easy-to-read tabloid

• BT is another popular tabloid

• Berlingske is another ”biggie” (a bit more to the ”right”)

• Jyllands-Posten got famous because of the Muhammad Cartoon Crisis (but it’s a fairly normal Danish newspaper, maybe little bit to the   ”right”)

• Weekendavisen is a really long newspaper with looong articles – and a kids section which might be a bit easier! 🙂

Some of the things you find in Danish newspapers are nyheder (news), læserbreve (letters from readers) and anmeldelser af film og bøger (reviews of films and books). If you get really hooked on an avis, you might consider to abonnere på den (subscribe to it).

BTW, if you haven’t already checked out this ”easy Danish” online newspaper, do it now: https://www.dr.dk/ligetil