Fun with Easter Eggs Posted by Bjørn A. Bojesen on Mar 31, 2018 in Traditions 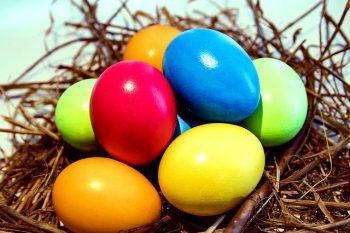 (Free illustration from Pixabay; no copyright.)

Påske [pawskeh] (Easter) in Denmark is usually a lot more laid-back than jul (Xmas). For many Danes, this welcome break from work is associated with nice little things like the coming of forår (Spring), påskeliljer (”Easter” daffodils), påskebryg (Easter beer) and the uniquely Danish tradition of scissor-cut gækkebrev letters (which I already wrote about). Still, nothing beats påskeæg (Easter eggs) and all the fun you can have with them.

Skal vi puste påskeæg? (Wanna blow Easter eggs?) Many Danes have burst out laughing while trying at puste påskeæg (or they have become really frustrated, as in a classical scene of the Danish action comedy Blinkende Lygter). The goal is to rid an unboiled æg of its blomme og hvide (yolk and white) so you can paint the æggeskal (egg shell) and use it as a decoration. To do that, you take a normal egg – usually a hønseæg, hen’s egg – and use a nål (needle) to make a whole in each end. Then you just start blowing into one of the wholes, until you look like a chipmunk about to explode, and voila! the contents of the egg should start pouring out of the other whole. It’s time to catch your breath, and a pensel (paint brush) to add your signature mønster (pattern) to the empty shell. Attach the painted egg to a tråd (string) and use it to adorn lamper, planter etc.

At trille påskeæg (rolling Easter eggs) is basically bocce/bowling with eggs. There are lots of different ways to do it. In parts of my own family, using real hen’s eggs was the thing (boiled together with onion to make the shells yellow). In this variety of the game, everybody takes turns at rolling – or even throwing! – their special egg on a floor. If they hit an opponent’s egg, they gets a point (and this goes on until all the eggs are smashed!) I’ve also played this game with chocolate eggs, where you got a number of eggs to roll – and could eat the ones you hit… On the island of Samsø the children use boiled, decorated eggs which they roll down a bakke (hill) – to see whose egg rolls the longest distance…

Of course, another fun activity to have with boiled or chocolate påskeæg is simply … eating them! God påske! 🙂