Going out in Denmark Posted by Bjørn A. Bojesen on Jan 31, 2020 in Uncategorized 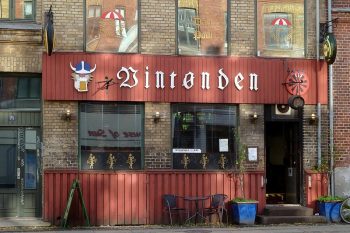 How do Danes survive the dark season? For many, the answer lies in good company and saying cheers across a table full of beers and drinks. For a Nordic country, Denmark has a vibrant natteliv (night life), with many places you can gå i byen (go out, literally ”go into town”).

Even the smallest Danish village often has a værtshus (public house), a kro (an inn) or a bodega (wine bar). If you come as a foreigner to a very small place, it may take some time before the locals trust you and are willing to let you into their community. Still, sharing an øl (beer) – or some non-alcoholic drink if you prefer that – is a great way to get to know local people.

Kan du lide at danse? (Do you like dancing?) Towns and cities have a lot more to offer for partygoers, from pubber (pubs) to natklubber (night clubs). Some places koster noget (cost something), while others are gratis [grahtees] (free) or come with a garderobe (wardrobe) fee. Here are a few dance-related phrases:

Nej, jeg kan ikke lide at danse. (No, I don’t like dancing.)

Most Danish barer (bars) today are røgfri (no-smoking), although some have a section where rygere (smokers) are permitted at ryge cigaretter (to smoke cigarettes). It is also common for bars to have terninger (dice) which the customers may borrow to play games.

Drinks are mostly more expensive than further south in Europe, which is probably why Danes usually stay for some time at a bar before moving on to the next. (Unlike in for example Spain, where it is more common to take a small drink at one place, then quickly proceed to somewhere else.) The word drinks in Danish is usually reserved for ”heavy” or mixed drinks (such as gin & tonic); there is also the Danish word sjus [shoos], which my dictionary translates as ”whisky-and-soda” (but it can be other combinations, too). Most of the time, though, people just buy øl (beer):

Hvad koster en øl? (How much does a beer cost?)

Har I flaskeøl? (Do yo have bottled beer?)

Har I alkoholfri øl? (Have you got beer without alcohol?)