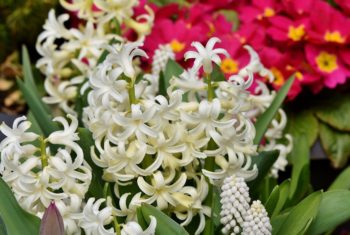 Der er forår i luften! (Spring is in the air!) Even though February is traditionally considered a vintermåned (winter month) in Denmark, the country surprisingly just jumped from frost og sne (frost and snow) to open blomster (flowers) – some say the temperatur increased more than 30 degrees in about a week (from -20 °C to 14°C some places)!

Of course, foråret (spring, literally ”the fore-year”) is a beautiful season in many places. For me, though, the contrast is particularly striking in Denmark, where so many winters are just dark and rainy (with just a few shining days of sne). All of a sudden, træerne (the trees) står i knop (are in bud), and the golden sol (sun) is filling people’s faces with renewed optimisme.

The transformation of spring is so magical in Denmark that many songs have been written about it. The following song, which many Danes know from pop singer Kim Larsen’s rendition, nicely captures the mood. (The text was written in 1895, so the copyright has expired.)