What’s Up with Danish TV for Kids? Posted by Bjørn A. Bojesen on Jan 22, 2021 in Uncategorized 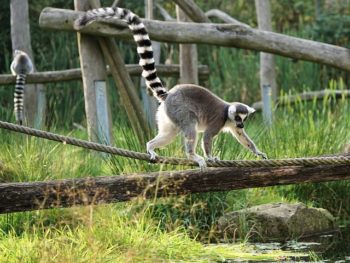 If DR’s show John Dillermand had been about a lemur and its long, striped tail, nobody would have noticed. (Free image from Pixabay; no copyright.)

For the small size of their country, Danes have really managed to create a lot of outrage. (Remember the prophet cartoon crisis or the killing of the poor giraffe Marius?) This January, Danes did it again – with a children’s tv show about a man and his very long private part. Er intet helligt (is nothing holy) in Denmark, a foreigner might ask…

(Please note that this is a blog about language and culture – it’s not my job to judge the tv show. 🙂 The debate caused by the show, however, should be interesting to students of Danish, as it definitely says something about Danish society.)

Do you know Marsupilami (in Danish: Spirillen), the leopard-skinned cartoon animal that looks like an abe (monkey) with a very long hale (tail)? 🙂 Both female and male marsupilamis can use their flexible tails to pick up ting (things) and solve problems. If Danmarks Radio (= DR, the ”Danish BBC”) had made a børneprogram (children’s program) about Marsupilami solving problems with his tail, all would be fine. DR, however, covered Marsupilami’s body and tail with a red and white striped bodysuit, turned him into a middle-aged mand (man) and moved the clothed tail from the back to the front and voila – it’s a penis (diller in Danish children’s slang).

Although DR insists that ”John Dillermand” is just a bit of harmless fun with no sexual undertones, many Danes just can’t believe the show is aimed at 4-8-årige (-year-olds). A parent I talked to, would not let his børn (children) watch it. Some experts worry that a show about a man using his magical private parts to master his surroundings would be unhelpful to the fight for ligestilling mellem kvinder og mænd (equality between women and men) in Denmark.

I tried to do a little bit of research on debatten for og imod (the debate for and against). An example of the supporters’ view would be the child psychologist Erla Heinesen Højsted: “John Dillermand talks to children and shares their way of thinking – and kids do find genitals funny.” To which the American comedian Stephen Colbert replied: ”Just because kids think something’s funny doesn’t mean it’s a good idea for a kids’ tv show.”

As any foreigner who has spent sommerferien (the summer holidays) in Denmark knows, many Danes have a very relaxed and down-to-earth attitude to life. People generally don’t make a fuss if they see somebody bathing nøgen (naked), for example. (Of course, Danish forældre – parents – also love their children, and would be the first to step in if something did not seem naturlig, natural.) I wonder if the views of Danes and foreigners sometimes ”crash” simply due to different traditions! 🙂

But also within Skandinavien Denmark seems to be the ”extremist”: As a child I loved, loved, loved Bamse og Kylling, a show about a teddy bear (bamse) and his best friend who happens to be a chicken (kylling). Bamse is just like a big kid (which is why I and everybody else loved the show): He wants to eat all the cakes – poor Kylling can take the leftovers.

But when Bamse og Kylling aired in Norge (Norway), Norwegian TV received a lot of complaints from parents worrying that the self-centred Bamse would not be a good role model for their children…