Queen of Scandinavia Posted by Bjørn A. Bojesen on Sep 30, 2021 in Film & Theater, History 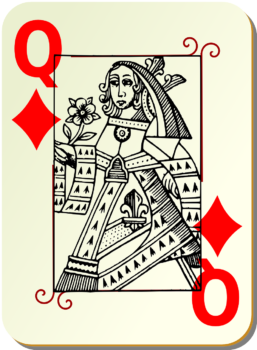 (Picture by OpenClipart-Vectors from Pixabay; no copyright. This is just to illustrate the article. 🙂 Click here for an idea of how Margrete may have looked.)

Did you know Danmark, Norge (Norway) and even Sverige (Sweden) were once united – and ruled by a kvinde (woman)? This month, Margrete den Første (Margrete the First), a film starring the Danish ”movie queen” Trine Dyrholm, is making its rounds in danske biografer (Danish cinemas). Let’s take a look at this important historisk skikkelse (historical figure).1If someone is a history expert and I somehow made a mistake in the blog post, please feel free to comment! 🙂 And yes, you guessed it – she’s the reason the current queen is called Margrethe II.

In the year 1397, all of Skandinavien was united in Kalmarunionen (the Kalmar Union, after a Swedish town). As someone with family in all three countries, I always thought this was an excellent idea! 🙂 But alas, the union wasn’t born out of some romantic idea of Nordic brotherhood. It was all about family ties and magtspil (power play) – and Margrete was pulling the strings.

A daughter of the legendary Danish king Valdemar Atterdag (literally: Vladimir Another-Day), 10-year-old Margrete was strategically married in 1363 to the Norwegian king, who was twelve years her senior. This was a very clever move, as her brand-new husband Håkon Magnusson also was in the line-up for the Swedish throne – a claim the Swedes, however, didn’t fully recognize while Håkon was alive.

Margrete had to leave her dad and her mother Helvig behind as she went to live in the Norwegian castle of Akershus outside Oslo. Here she gave birth to her only child Oluf in 1370. At a time when women had few options, her male child was to play an important role in her karriere (career):

Of course there’s much more to the story than just names and numbers – that’s what the movie is for! 🙂 Men er det ikke spændende at den første Margrete herskede over hele Norden? (But isn’t it exciting that the first of the Margrethes ruled all the Nordic countries?) Kalmarunionen went all the way from Grønland to Finland. When Margrete herself died in 1412, she had created a powerful empire (along with her adoptive son Erik af Pommern).

Ever wondered why Danish and Norwegian look so similar?

In 1464, Sweden2and its territories in Finland dropped out of the union, but Norway and Denmark remained tied together until 1814 – and Danish was used as an official written language in Norway for a long time. So, if you’re learning Danish and find yourself understanding Norwegian, you might thank (or blame!) Margrete.