Adding Endings Posted by Bjørn A. Bojesen on Oct 19, 2021 in Grammar, Pronunciation 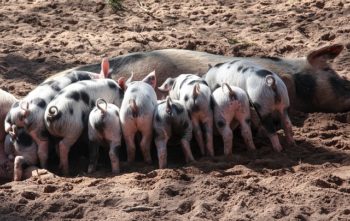 Krølle-r-ne på hale-r-ne på gris-e-ne… (The curls on the tails on the pig[let]s…) Endings are an essential part of the Danish language. (Illustrative photo by Gerhard G. from Pixabay; no copyright.)

One of the funny things about Danish is that you can’t avoid adding endings to words. Well, of course English learners also sometimes get confused – how do you add a plural -s to box? But generally, as long as you know how to add an -s1and a few other common endings, such as -ing, -ed and -ly to words, you don’t have to worry about endings in English. Danish is more complex, mainly because – and I’m sure you learnt this early – the is an ending! Yeah, Danes don’t go to ”the party (fest)”, but rather to ”party-the” (fest-en).

The main challenge is knowing which word takes which ending.

• Plurals of many Danish nouns (by, træ, kvinde, system – city, tree, woman, system) are made with -er, while many other nouns (hund, kat, ost, hus – dog, cat, cheese, house) take the ending -e, or, in the case of just a few words (år, sværd – year[s], sword[s]), no ending. (And yes, the plurals of some words imported into Danish from other languages2predominantly English, but you’ve also got Spanish plurals such as tapas sneaking into Danish! 🙂 even end in -s.)

• Singular the varies according to the noun’s gender – you have to know whether the word you’re about to use has the common (the = -en) or neuter (-et) gender.

træ–er, hund–e, ost–en, hus–et. But what if a word already ends in -e – do you really write kvinde–er? 🙂 Naturally, you just remove the -e, then add the ending – kvinder.

The plural the is -ne3Could also be analysed as -e(r)ne, but I find the -ne breakdown easier. – you simply attach it to the regular plural:

If the preceding word ends in a consonant, you insert an extra -e-4Originally this was done for pronunciation’s sake; nowadays Danish pronunciation is so blurred that it’s mostly a spelling convention! 😀 There’s hardly any difference between årene or år’ne, for instance.:

NB1! Some words already end in -er in the singular. Very often, these nouns denote persons – such as bager (baker) or svensker (Swede). Even though they do have -e plurals (bager–e, svensker–e), the -ne is added to their basic form: bager–ne, svensker–ne.

NB2! A few short words end in -p, -t or -k. This letter is always doubled before endings: