100 years of Schiphol Posted by Karoly Molina on Nov 30, 2016 in Culture, Dutch Language

For many of us, Schiphol has been the first piece of the Netherlands that we encountered. The vast size of the airport is felt on the long walk from the plane to the exit gates each time you fly into Schiphol. This year, Amsterdam Airport Schiphol celebrates its 100 years of existence as the gateway of the Netherlands. 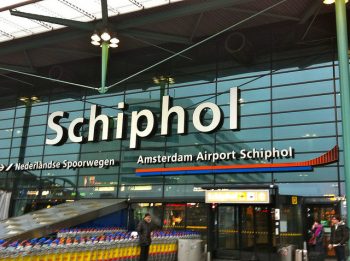 But how did Schiphol begin? Here is a very brief history of Amsterdam Airport Schiphol:

In 1916, Dutch pioneers started Schiphol Airport with just a few wooden hangars in the reclaimed area of the Haarlemmermeer during World War I. After the war, the small airfield was used for airmail and cargo. Shortly after, the Royal Dutch Airline KLM is founded and the route Amsterdam-London becomes the first scheduled flight in 1920.

After struggling with flooded landing strips and hardly any facilities, a new station for the airfield is constructed to welcome the Olympic teams of 1928. Schiphol continues to grow both in traffic and structure the next couple of years, but is later destroyed by Allied forces during World War II during the Nazi invasion. It isn’t until 1949 that a new station is built and traffic once again increases at Amsterdam Airport Schiphol.

The arrival of the jet planes requires a bigger and better airport. Thus, in 1958, a completely new plan for Schiphol is created and construction begins just a few kilometers west of the original location. On April 28, 1967, Queen Juliana inaugurates the new Schiphol Airport. From then on, the increase in travel and air traffic pushes for further expansion of the airport to vast size we now know. It is no longer an airfield but a vast airport-city with shops, restaurants, hotels, and enough space for the 55 million passengers, 1,6 million tonnes of cargo and 65.000 people that work there each year.

To celebrate such a grand and important history, several events and activities have taken place throughout the year. The Amsterdam Museum has a special exhibit of the 100 years of Schiphol full of photographs and stories. If you can’t make it to the exhibit, you can visit the online museum and watch the following video.