4 New Year’s Traditions from the Netherlands Posted by Karoly Molina on Jan 3, 2018 in Culture

The 2017-2018 New Year’s celebration was my first in the Netherlands, and at home, we made it a point to be as traditional as possible. It was a very nice experience and the following are 4 traditions I learned: 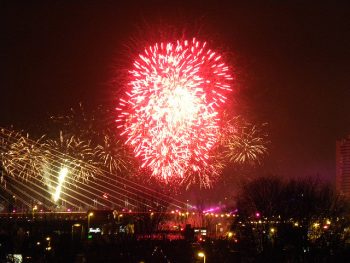 Photo taken by Rool Paap found on Flickr.com with license CC BY 2.0

These are the two phrases you need to learn for the end of December and the beginning of January. The first one is used before New Year’s and means something like “I already wish you a good change in year.” The second one is used after and is the equivalent of “Happy New Year.” You can also tell someone de beste wensen voor 2018 once it is the new year.

One of the first culinary experiences I had in the Netherlands was gourmetten. My in-laws planned a family dinner in which we all cooked our own food on the table. At first, I thought “someone got lazy with the cooking,” but I have come to appreciate the process of it. At the table, you put an electric pan where you cook small portions of meat meat (vlees, kip, varkensvlees en vis). Underneath you have small trays where you can prepare other things like vegetables or toast bread and cheese. Because you are cooking the food while you eat, it is a longer dinner with great company.

The following video gives you some useful tips for gourmetten.

No Dutch celebration would be complete without something fried. Oliebollen which literally means balls of oil (or oily balls) are something like giant doughnut holes. The traditional ones come with poedersuiker on top, but now you can buy them with all sorts of fillings like appel, banaan, rozijnen, and kersen. You can find Oliebollen-trucks outside most grocery stores, markets and shopping areas. There is even one outside Schiphol during the winter.

The Dutch take their oliebollen seriously and there was recently a heated debate on TV about the AD (Algemeen Dagblad) and the tests it conducts for the best oliebollen (and haring).

Fireworks are legal on New Year’s Eve in the Netherlands and the Dutch like to go all out! It is estimated that the Dutch spent 68 million euros on fireworks for the celebration this past weekend. While in our street only our neighbors had fireworks (and these were the small kid-friendly kind), once the clock stroke 12am, we saw a magnificent show all around.

How did you celebrate the New Year? Do you have different traditions?