Be normal! and other reasons why the Dutch are plain as appeltaart Posted by tiffany on May 22, 2013 in Dutch Language 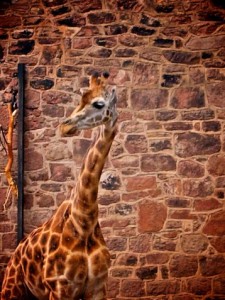 The Dutch are all about blending in. Funny since, as some of the world’s tallest people, they tend to stick out like sore thumbs when they travel outside the Netherlands.

The goal is to downplay achievements and possessions so as not to appear “better” than anyone else. For all that they love to leave their windows wide open and in full view, the Dutch tend to keep everything else on the down-low.

As one learns during the inbureringscurses, asking a Dutch person how much he makes or how much her new car cost is as great a transgression as asking a woman’s age is in other cultures.

Don’t brag, don’t show off, don’t display too much personality, don’t publicly show emotions, follow all the rules and regulations, don’t act like you’re better or better off than anyone else.

This way of life is attributed to the country’s Calvinist roots. Though the religion no longer dominates in the Netherlands, there are still traces of it in the language.

For starters, take the saying “doe maar gewoon” (just be normal). It might just be the most important phrase for you to learn if you want to speak Dutch. Goodness knows you’ll hear it enough in your day-to-day interactions with Dutch speakers.

Or you might be treated to its cousins “doe normaal” (be normal) or “dat is niet normaal” (that’s not normal).

Then there are all the sayings and proverbs that act as constant reminders not to color outside the lines:

Hoge bomen vangen veel wind –> “Tall trees catch a lot of wind.” This is the Dutch equivalent of “The bigger they are, the harder they fall” or “The higher you climb, the farther you fall.”

Steek je kop niet boven het maaiveld uit –> This translates loosely to “Don’t stand out from the crowd.” It literally means “Don’t stick your head above the mowing field (lawn or ground level).” The less frequently uttered second half of that sentence is “anders wordt hij eraf gemaaid” or “or else it’ll get cut/mowed off.” Well if that’s not incentive to keep yourself in line, I don’t know what is!

Wie voor een dubbeltje geboren is, wordt nooit een kwartje –> Literally translated, it means “He who is born a dime will never be a quarter,” essentially meaning “Born poor, stay poor.” The message here is that attempts to rise above your station in life are futile.

This mentality can be quite a shock to someone such as myself who grew up in a culture that encourages being loud and proud about your differences, your quirks, your hard work, your successes, and your talents.

But it’s what makes the Dutch Dutch. They may be plain as appeltaart (apple pie), but that’s why we love them.