Book Review: In the City of Bikes by Jordan Posted by Karoly Molina on Sep 29, 2016 in Culture, Dutch Vocabulary

There is a section at the gift shop of the Rijksmuseum that has books about the Netherlands in different languages (mostly English and French). Every time I am in the neighborhood, I check the selection and purchase one or two books. On one of those trips, I purchased In the City of Bikes: The Story of the Amsterdam Cyclist and brought it home. It sat for a good while until I finally thought of giving it a chance. Perhaps I was skeptical because I prefer fiction. Perhaps the bike topic seemed to obvious. Little did I know then that this book would become one of the funnest reads ever! 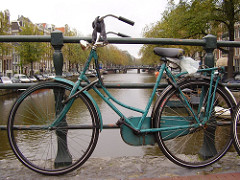 Once I started reading, Jordan’s narrative quickly took hold of me and didn’t let go. The history of bikes in the Netherlands, and specifically in Amsterdam, was truly captivating and often times funny. Instead of doing a usual summary, I will simply share with you a few interesting facts and anecdotes from the book.

While the novel does fall into some stereotypes and clichés about bikes and the Netherlands, it is a very entertaining read. The last time I was in Amsterdam, I appreciated the cyclists a little bit more!

What is your favorite bike-related read?