One of the most infamous prisons of the Netherlands, the Bijlmerbajes, closed on June 1, 2016. It started as a humane prison, without bars in front of the windows. The cell doors were mostly open all day long, and some of the gedetineerden (detained) even had the key to their own cell. But notorious escapes ensued, and the Bijlmerbajes became more like a prison. Time went on, and ultimately it was closed because it was too old, inefficient, expensive… Niet meer van deze tijd (“not anymore of this time”)

The Bijlmerbajes and its six torens (towers). (Image by Mark Ahsmann at Commons.wikimedia.org under license CC BY SA 4.0) 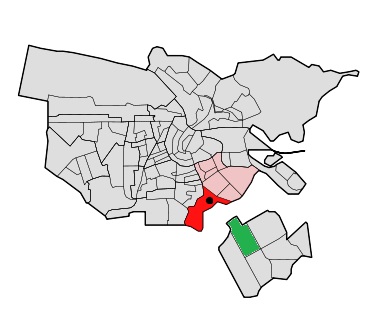 The full, formal name of the gevangenis was Penitentiaire Inrichting Amsterdam Over-Amstel (Penitentiary Institution Amstedam Over-Amstel). A mouth full! So it is not surprising that a nickname was used, and that became Bijlmerbajes. What does that mean?

Bijlmer refers to Bijlmermeer, a wijk (neighborhood) in Amsterdam. However, as the name suggests, the gevangenis is not located in the Bijlmer, but in Over-Amstel. On the image on the right, the red is Over-Amstel, and the green is Bijlmermeer.  The black dot is where the Bijlmerbajes is located.

If it is not located in Bijlmer, then why the name?

It is quite random, actually. On February 23, 1974, so 4 years before the prison opened, journalist Hans Smits wrote an article in the paper Vrij Nederland. A new metro station was built close to the prison, and he thought a fitting name would be Bijlmerbajes. When that term was adopted by an action group against building the prison, it stuck. So when it opened in 1978, it was already called Bijlmerbajes!

The gevangenis was opened in 1978, without bars in front of the windows. When it turned out that the glass wasn’t unbreakable, they placed bars after all, called tralies in Dutch. But that sounds so prison-y, and not humane, so they called the tralies ‘lamellen‘ (blinds).

The cells were not actually called cells. Also too prison-y. Instead, the cell doors were left open often the entire day. They were called leefeenheiden (living units), and got the cute nickname woonkamertje (small living room).

Many activiteiten (activities) were organized and even the artist Herman Brood had an optreden (gig) in the prison.

Why was it shut down?

The prison is 40 years old, and it is noticeable. It is just not of this time anymore. The way it is set up does not allow the prison guards to work efficiently and the building is expensive to maintain. Furthermore, the huge area that the gevangenis takes up is very wanted real estate now. In 1974, Bijlmermeer did not exist yet as a wijk, and the gevangenis was originally built outside the city. Now, it is in the middle of it, as Amsterdam keeps expanding.

So, the building will be demolished in the future to make room for houses. Before that though, it will be adjusted a little to accommodate vluchtelingen (refugees).

There is a new replacement, the Justitieel Complex Zaandam (Judicial Complex Zaandam), which some already call Zaanbajes. It is a new, modern prison, that also wants to promote collaboration between prison guards and prisoners.

Dutch news broadcaster NOS made a 360° video of the gevangenis (prison). Drag through the video to look around! They give some information around too. Super cool!

Also, if you are more interested in how the prison life was back in those days, the program Andere Tijden made a half-hour documentary about it. Worthwile!

And as always, if you have any questions or comments, leave a comment below or send us a message on Facebook by clicking the button below!