How the Dutch do Charity – Particularly once every Year Posted by Sten on Jun 6, 2014 in Culture, Dutch Vocabulary, News

Giving money to charity is nice. We all know that. Many people donate some amount regularly to a certain cause, but no challenge or strings attached to that. The Dutch got an idea how to tie a challenge to it and actually get people involved. 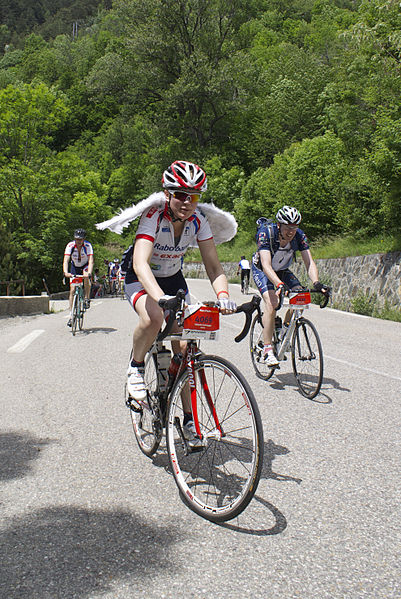 You might have heard of Alpe d’Huez, an infamous French skiing area, best known for its ascent to the top that is feared by wielrenners (racing cyclists) because of its steep slopes and merciless exposure to the heat of the French summer. By now, 27 times it has been included as a finish of a tour stage in the Tour de France, the best known and prestigous race cycling event of the world (yes, the one that Lance Armstrong won 7 times).

What about the Dutch, then? In wielrenner circles, Alpe d’Huez is sometimes even referred to as onze berg, “our mountain”. Of the 27, the Dutch won 8 – that is very successful, considering the huge amount of participants to the Tour de France. It made this a popular venue for Dutch wielrenners – laten we de Alpe d’Huez beklimmen! (let’s climb the Alpe d’Huez!).
And the connection to charity? That connection was made by Coen van Veenendaal and Benjo Agterhorst in 2005. They found it a nice idea to climb the Alpe d’Huez six times in one day to collect money for fighting cancer. And many people agreed. So the foundation Alpe d’HuZes was founded by the two. Alpe d’HuZes sounds very similar to Alpe d’Huez in Dutch, because the z at the end is pronounced as an s. So the only letter missing is the z to form the word Zes (six). It was a huge success right from the first edition in 2006. It was held every year from 2006, and every year another climb was added (so 7 in 2007, 8 in 2008, etc., however 6 always remained the main goal to reach). In 2006, there were only 66 participants. In 2012, the best year, there were 8000! And the amount donated also increased dramatically. From less than half a million in 2006, it went up to over 32 million in 2012! Amazing numbers, that are all given to KWF Kankerbestrijding, an organization researching ways to fight cancer.
However, this year the enthusiasm diminished. Last year, it turned out that Coen van Veenendaal, one of the founders, had taken some of the money for himself. There was a lot of indignation among the Dutch – so this year on June 5th, only 5000 wielrenners participated. And scrambled together a bit over 12 million euro. A lot less than previous years, but it has to be noted that in 2012 and 2013, Alpe d’HuZes was held on two consecutive days. So money could be collected on two days by more participants.
Despite that negative publicity, it still attracts quite some media attention, and is for example shown on Dutch TV here.

On the website opgevenisgeenoptie, you can find more information, with photos and videos and the entire list of participants of this year’s edition.