How to Ride a Bike in the Netherlands Posted by Karoly Molina on Dec 3, 2015 in Culture 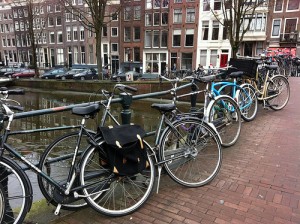 Bikes in the Netherlands (image by Andy Nash at Flickr.com)

Bikes are one of these three icons that stand out because it is something essential to Dutch life. A visitor to any Dutch city can appreciate the necessity of bikes by simply observing the sheer number of them outside train stations, on the streets during rush hour and near schools of all levels. I am always amazed when I see people riding bikes, holding an umbrella and messaging all at the same time without even flinching.

But how do the Dutch become so good at riding bikes? Is it part of the Dutch genome?

In the Netherlands, children start very young. Toddlers who are barely learning to balance as they walk are also given bikes with no pedals. It seems childhood in the Netherlands is all about learning to balance on your two feet and your two wheels. Once children master the art of balancing on the bike, they receive a bike on their own to move around and thus begins their freedom in two wheels.

(As a side note, I would like to point out that I have yet to see a child using training wheels.)

But freedom does not come with responsibility and this is very clear in the way this biking country makes sure their young can safely ride their bikes. Every April, neighborhoods near all basisscholen are filled with students riding their bikes in the company of school teachers. Once these students turn 12, they are required to take verkeersexamen or a traffic exam. This is with the idea that once these students go to middelbare school, they can safely fietsen. The following video gives an explanation of the verkeersexamen.

What are your thoughts on the fietscultuur in the Netherlands?