The Fietsenmarkt Posted by Sten on Sep 12, 2014 in Culture

Fietsen (bikes). Yes, another post about bikes.  Fietsen are after cheese, weed and tulips the main stereotype commodity of the Netherlands. There are SO many here! There is even a rumor that the country counts more fietsen than inwoners (inhabitants). Eng (scary)!

When I was walking through Amsterdam last week, I saw hundreds of fietsen. Locked in front of stores, to bridges, to street signs, bollards, next to the grachten… There is not a street in the city where you cannot find a fiets. Some were parked there at some point in distant history, but were never picked up again. And never will be. What happens to these?

Some just waste away, locked to their pole. Wheels are stolen, sometimes even the saddle and the steering bar, and just the frame remains. And the lock, of course.

Some are robbed, often enough by zwervers (homeless people) who just want 10 euros for a bike to pay their next beer. That happened during the night, when I was offered to buy a bike.

Some are taken by the gemeente (municipality) after standing at a certain place longer than six weeks. It then keeps it at a place outside of town, where you can pick up your bike again or where you can buy one of those bikes for very little money.

With many non-Dutch people I have seen great disbelief and shock upon hearing how the Dutch “fietsenmarkt” (bike market) works. Especially as a student, with not hundreds of euros to spend on a bike, it is very good to know it. 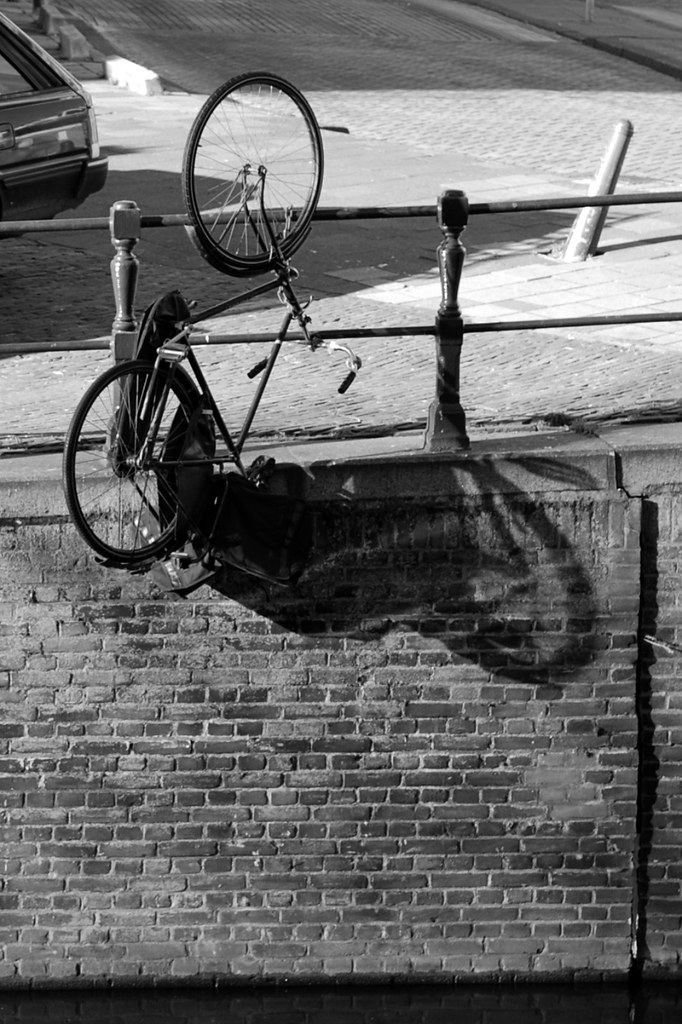 Fiets in de gracht?! (Image by Donna at Flickr.com)

Especially in the large cities, it is not advisable to buy a new bike, or expensive second hand bike. Even if you have a great lock, it is a lot more attractive for thieves to steal a fancy, new bike than a crappy one. Because bike thieves there are! It is definitely not OK that they steal bikes, but it does happen a lot, and it is regarded as a petty theft, like a kid stealing a candy bar from a store. It is not OK, and should not be accepted, but it also is not that big of a deal. During the night, the robbers offer the bikes for sale, and do not ask more than 20 euros for any bike. If your bike is stolen, there is a premise that you can “steal one back”. Now, nobody tells you to become a thief, and fortunately it is not that way in the Netherlands, but the attitude to bikes shows that they are not of great value.

Of course, this does not mean you cannot go around in the Netherlands with a nice bike, but if you live in larger cities and lock your bike in the middle of the city, then the chance that it gets stolen is simply very high. And then if it gets stolen, it is a lot worse when the bike cost a lot and maybe meant something to you. You don’t want to lose so much money to a bike! So, be warned!

How is it in your country? And what do you think about this small-value thinking of bikes?