The Heiligdomsvaart of Maastricht Posted by Sten on May 31, 2018 in Culture, Dutch Vocabulary

Processions through the streets of Maastricht, people coming into the city from all over, and it all has a very religious feel. What’s going on in this city? Well, it is actually a quite special, long-standing tradition!

The Heiligdomsvaart is an event that currently runs in Maastricht for 10 days in honor of the stadsheilige (“city saint” – patron) Sint Servaas. It started last week, on Thursday, May 24, and it runs until Sunday, June 3. There is an extensive programma (schedule), with different daily activities. What makes it special is that it runs only once every 7 years, and this is the 55th edition! While that implies that this event goes back 385 years, it is actually presumed that it was organized for the first time in 1391, or even earlier! The reason why there was a break were (threats of) oorlogen (wars), but also a reduced enthusiasm for this Catholic tradition due to the Reformatie (reformation).

During the event, there are two processies, also called ommegangen (a “walk around”). The first one is on the first Sunday (this year May 27) and the second on the second Sunday (this year June 3). This second ommegang also signals the end of the feestelijkheden (festivities). During these processies, the main relieken (relics) and beelden (sculptures) are carried through the city on draagbaren (stretchers).

Every heiligdomsvaart has its own theme. This year’s theme is ‘Doe goed en zie niet om’ (Do good and do not look back).

St Servaas – who was he? 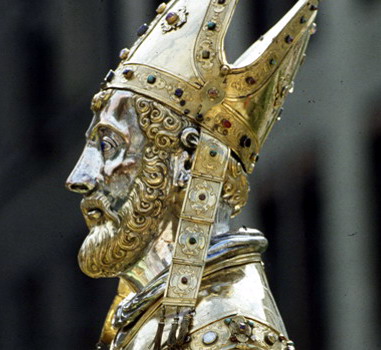 Sint-Servaas is the first, historically verifiable bisschop (bishop) of the Netherlands. And he happened to be the bisschop van Maastricht (bishop of Maastricht). His graf (grave) is inside the Sint-Servaasbasiliek (Saint Servaas Basilica). While there are some legenden (legends) about his life and certain events that were toegeschreven (attributed) to him, there is no zekerheid (certainty) about this. His impact for Maastricht was mostly that a lot of the inner city center is shaped by buildings related to the Sint-Servaasbasiliek. Due to the fact that he was a beschermheilige (patron), he attracted a lot of bedevaarders (pilgrims).

This year, children from 5 basisscholen (elementary schools) decided to hold their own processie (procession). Instead of carrying holy artifacts, they had collected eten (food) for the voedselbank (food bank)! See the video above for this hartverwarmende initiatief (heart-warming initiative).

Would you like to participate in this heiligdomsvaart? Do you have such a long-standing tradition in your city or country as well? Let me know in the comments below!