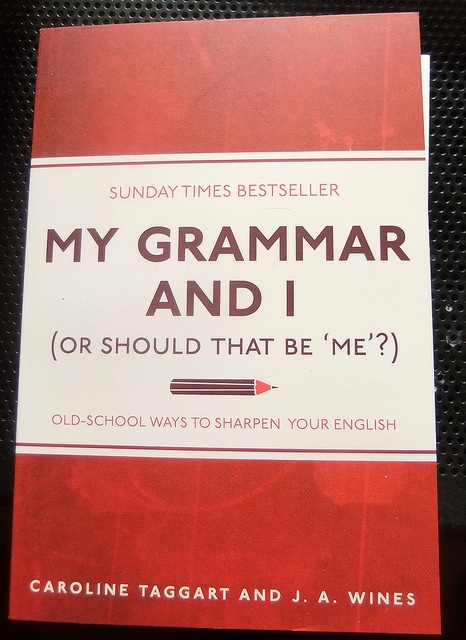 Image “My Grammar and I” by Gwydion M. Williams on Flickr.com.

It is time to do a review of the parts of speech in English! This post will be a review for many people, but for some it may be introductory. For everyone there is a practice exercise at the end of this post for you to see how well you know your parts of speech.

Let’s take a look at all the parts of speech in English to help us better do what we want to do with our words – say something!

Nouns:  Nouns are naming words for people, places, and things. We can’t talk or write about anything until we have given it a name.

Pronouns: A pronoun is a word that stands in for a noun so that we don’t have to repeat the name of a noun over and over again. In English we have male (he), female (she), and gender neutral (it) pronouns.

Verbs: A verb expresses action. You could say the verb is the motor that runs the sentence (like a motor runs a car), without it there would be no movement.

Adjectives: An adjective is a word that describes a noun. It adds descriptive or more detailed information about the noun, but the adjective is not a noun itself.

Adverbs: An adverb is a word that describes a verb. It can also describe another adverb or an adjective. It adds descriptive meaning.

Interjections: An interjection is a word or phrase that express an emotion (like ‘Oh!’). It is its own unique kind of word and shouldn’t be confused with a noun. Onomatopoeia is a kind of interjection.

Those are the parts of speech in English, now here is your practice. Take a look at the group of words below and separate them out into these eight different parts of speech. Scroll down to see if you got them all right.

Pronouns: I, you, she

Verbs: be, would, wish

Adjectives: an, the, some, two, interesting

Prepositions: to, after, on

Conjunctions: but, and, when

Now here is your real challenge, see if you can write a (long) English sentence using as many of these words as possible! Please share it with us all in the comment section below