Breaking News: England has a new royal! Posted by Gabriele on May 4, 2015 in News 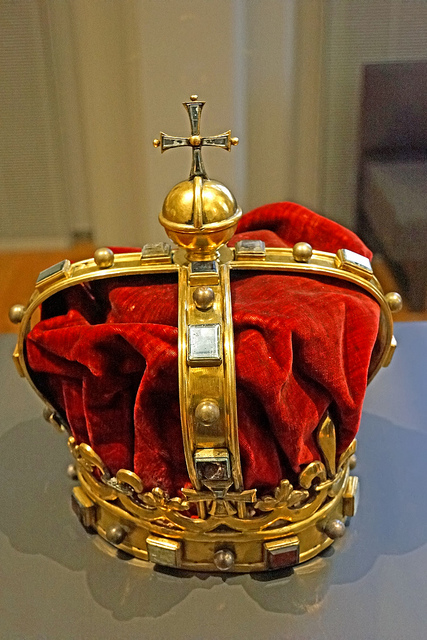 Image of a royal crown by
Dennis Jarvis on Flickr.com.

Have you heard the news? There is a new royal in the family! The Duke and Duchess of Cambridge, or as they are also known, Prince William and Princess Kate, have just had their second child, a little princess.

The proud parents are of course being very protective of their new little one, so we will have to wait a little longer to find out more about the new princess, but in the mean time, the birth of this new royal baby gives me the perfect opportunity to introduce some “royal” vocabulary and explain the line of succession to the British throne.

Let’s start with a few “titles.” Royalty are given titles, beyond those titles that you or I might use, like Mister (Mr.), Misses (Mrs.), etc.  English titles for the highest level of royalty include: king (male), queen (female), emperor (male), and empress (female). These are the titles used for rulers of countries or kingdoms. After each title here I have indicated if it the title is used for a male (m) or female (f). The children of a king or queen also have special titles, which include: prince (m) or princess (f). Additional titles often given within a royal family include: duke (m), duchess (f), count (m), countess (f), etc.  Figuring out who gets what title within the immediate royal family is beyond my expertise, but this foundational vocabulary, introduced above, is a good start. Please keep in mind that in English titles are always capitalized when referring to a specific person. They are not capitalized when referring to royalty in general. For example: ‘Prince George’ vs. ‘The princes gathered together.’

Here are some additional royal vocabulary words for you.
(n) = noun
(v) = verb

castle (n) – a large stone building, constructed to protect the people within it against attacks; in the past royalty often lived in castles

coronation (n) – the ceremony in which a king or queen officially becomes the ruler of their country; in this ceremony a crown is placed on the head of the new ruler

crown (n) – a round headdress worn by a king, queen or other royal family member as a symbol of authority; crowns are often made of precious metals and decorated with jewels

highness (n) – a title given to a person of royal rank; the title is used in addressing a king or queen; for example: “Welcome your highness.”

line of succession (n) – see below

monarch (n) – a head of state who became ruler through birth right, i.e. a king, queen, or emperor

reign (n) – the period during which a monarch rules

reign (v) – to hold royal office; to rule as king or queen over a country or kingdom

scepter (n) – a staff that is a symbol of authority; it is often carried by a king or queen during official ceremonies

throne (n) – the chair that a king or queen sits in; a chair that is a symbol of authority

The line of succession is the order in which members of the royal family progress to the throne. The newly born princess has now entered this line of succession. So, let’s take a look at what that order is, and where the new princess fits into it, and how to use some of the vocabulary introduced above.

Welcome to the world princess!