Extreme sports and English vocabulary Posted by Gabriele on Jul 8, 2014 in English Vocabulary

It is the time of year when people are outside enjoying the nice weather and often even playing some sports with friends. Today I thought we’d look at some vocabulary for different sports in English, but not regular old sports like baseball or volleyball, extreme sports or xtreme sports.

Extreme sports are sports that are generally thought of as having a high level of danger. These sports usually involve speed, height, a lot of physical exertion, and also great skill. A lot of the extreme sports we are going to look at today gained popularity in the 1990s, but many of these sports had been around before that time.  Extreme sports started gaining greater popularity in the 1990s because they started having their own televised competitions and national/international championships, called the of the XGames.

Let’s take a closer look at some of these sports that are often in xtreme sport competitions. 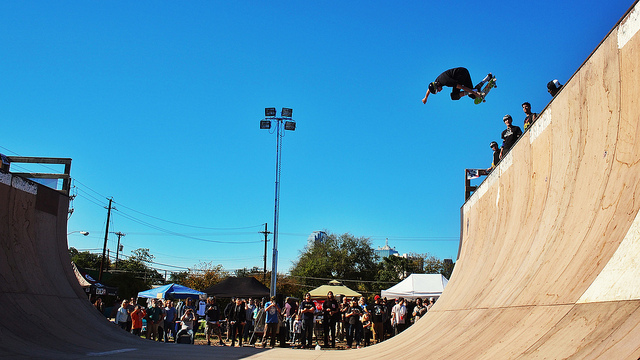 Image by Scott Lumley on Flickr.com.

vert skating – This is a sport that includes a half-pipe. A half-pipe is a large man-made structure that looks a bit like the letter U (it is pictured above). It has two concave ramps that meet in the middle with decks on top of the ramps. Athletes wearing inline skates, roller skates, or on skateboards preform tricks while skating on the half-pipe.

BMX (or bicycle motocross) – This is a cycling sport that involves riding motocross bicycles on pre-made courses, which are on or off roads.  The courses are usually very difficult to ride on and it takes great skill to know where you are going and not fall off the bike.

mountain biking  – This is a sport that involves riding mountain bicycles off-road, usually in the mountains over rough terrain. Speed is important in mountain biking and so is not falling off the bike!