March Madness Posted by Gabriele on Mar 19, 2012 in Culture

The term “March Madness” does not refer to people in the United States becoming crazy in the month of March, well, not exactly.  March Madness is the name given to the championship tournament played by the National Collegiate Athletic Association (NCAA) Men’s Division I (the highest division) basketball teams in the United States.  Because teams from colleges all around the country play in this tournament, people all around the country are often very excited about this tournament.  The tournament is played over multiple weeks, in the month of March, which is why it is called “March Madness.”

So, how does the March Madness tournament work?

Sixty-eight college basketball teams play against one another in single-elimination* games to determine the national college men’s championship basketball team. The tournament teams include champions from 31 Division I conferences** and an additional 37 teams which are given “at-large” (or “extra”) spots by the committee that runs this tournament.  Once the 68 teams who are to play in the tournament are decided upon, they are ranked and organized into a single elimination bracket***.  These brackets determine which teams will play against each other.  Lower-seeded (lower ranked) teams are placed in brackets against higher seeded (higher ranked) teams. The number of teams playing is cut down from 64, to 32, to a “Sweet Sixteen,” then to the “Final Four.”  Then the final two teams play against one another to determine the national championship team.

Due to the predetermined bracket system used to group teams in the March Madness tournament, it is fun for people to make predictions and bets about what teams will play against one another and what teams people think will be in the “Sweet Sixteen” and “Final Four.”  During March Madness many Americans create betting pools to see if their predictions for who will win what games are accurate.  Other than team pride or pride in one’s alma mater**** that is playing in the tournament, these betting pool are a big reason many people become very interested in basketball during March Madness. 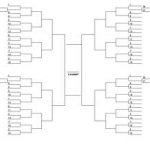 ***alma mater = the school, college, or university that one once attended