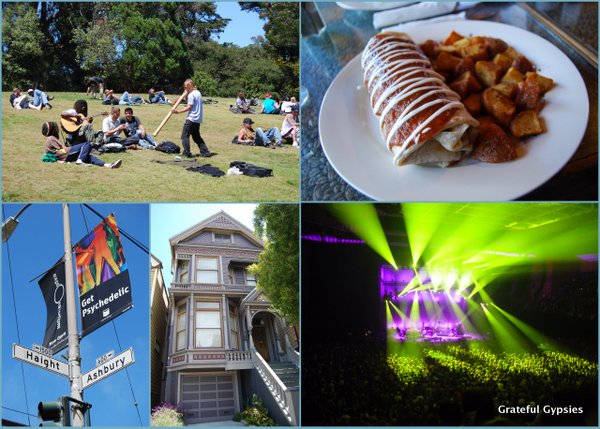 Join the Grateful Gypsies on a video tour of San Francisco that highlights the “Streets, Beats & Eats” of this famous American city. Take a stroll through Golden Gate Park, hit the legendary Haight-Ashbury neighborhood, and go Phishing at the Bill Graham Auditorium.

“Start a day in San Francisco with a coffee and a walk on the beach. It’s rarely warm enough here to lay out or go swimming, but it’s still a nice place for a stroll… especially with your dogs.

Next, head to Gate Park, where you can see the once nearly extinct American bison. This huge park is actually bigger than New York’s central park. There’s a lot to see here, including the rose garden and the conservatory of flowers. It’s a popular place to just hang out… Get around the park on segway, a sightseeing bus, or even the magic bus.

Nearby you’ll find one of the city’s most famous neighborhoods – Haight/Ashbury. At 710 Ashbury street is the former home of the Grateful Dead, a band synonymous with San Francisco. You’ll even see images of band members Jerry Garcia and Pigpen on the sidewalk.

Although the summer of love is long gone, the Haight is still an interesting place to visit, with a wide variety of shops, from vintage, to glassware, to music, to the Haight Street Market.

Shop for cool clothes with a bargain price tag at Buffalo Exchange. Head to Decades of Fashion for clothing, accessories, and jewelry from every decade since the 50s. Or pick up some new tunes at Amoeba Music. Anyone who thinks record stores are a thing of the past should come here. Peruse the vinyl, books, and even old concert posters.

For lunch, drop by the People’s Cafe. Inside you can browse the local art for sale while you contemplate their large menu and decide what delicious draft beer to have. Fill up on a massive burrito, or go slightly healthier with a Thai chicken sandwich, and wash it all down with a pale ale.

There’s always music going on in San Francisco. Once in a while the circus comes to town when Phish plays a 3-night stand at the Bill Graham Civic Auditorium. Near City Hall and the Supreme Court, thousands of fans gather before the show. Take a walk down Shakedown Street, where you can pick up t-shirts, crystals, pins, handmade jewelry, and plenty of other things. If you don’t have a ticket, put that finger in the air…

If you’ve got one, get inside and stake out a spot…”