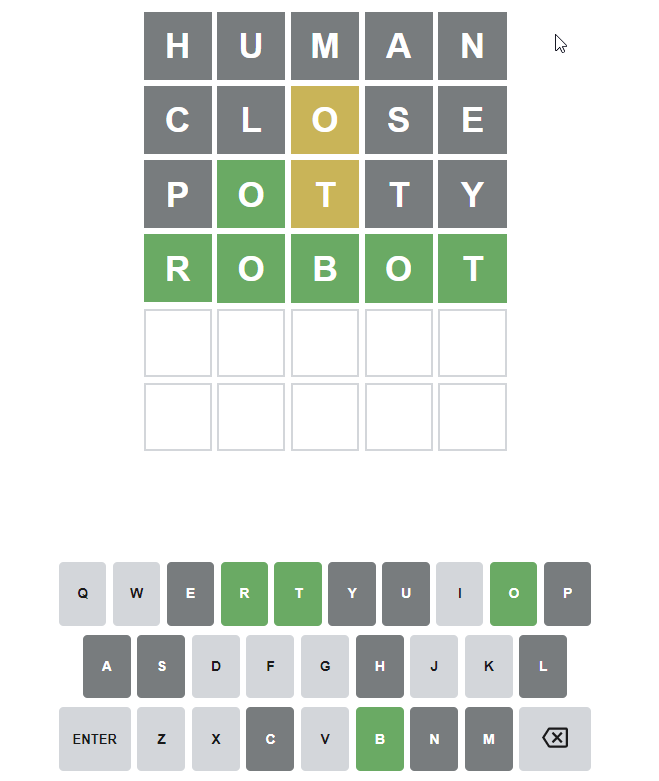 Screen capture by author and used with permission

Perhaps you’ve already discovered Wordle, the daily word game that is sweeping the English-speaking world. You may have seen the six rows of five squares in green, yellow, and white shared by your friends on various social media pages. It is now one of the most increasingly popular online games – and it deserves to be. If you want to test your English language vocabulary, this is a good game to play.

Perhaps the best thing about Wordle is that it was never intended to be anything more than a private little game created by a guy to give to his girlfriend. Josh Wardle, a programming engineer, knew that his girlfriend liked puzzles and games, so he developed a word game for her to play every day. Soon, a few friends and family members were invited to play on a private WhatsApp group.

After a few months, it became apparent that Wordle had begun to take on a life of its own. So, in October, Wardle and partner/girlfriend Palek Shah made the game available to everyone. On November 1, it had 90 players. On January 1, it had over 300,000. When Wardle added a non-spoiler way to share a player’s results on social media, the game’s popularity exploded.1https://www.nytimes.com/2022/01/03/technology/wordle-word-game-creator.html

Wardle developed the game for Ms. Shah, but she contributed to it along the way. Perhaps her most significant contribution was to simplify the possible answers. There are around 12,000 five-letter words in the English language. Ms. Shah narrowed the list down to a manageable 2500 words, most of which are fairly common. Broad knowledge of The Oxford English Dictionary is not needed.

Because it generates a new game only every 24 hours, Wordle is probably something that you will never tire of. You may want to try again right away, but you must wait. And it’s remarkably low-tech. There are no annoying sounds or flashes – or ads. It’s refreshingly simple, yet challenging.

The key to success is to use as many vowels and common consonants as you can in the first two guesses. Remember that “e” is the most common letter in English. It is reasonable to assume that the correct answer will begin with a consonant, followed by a vowel. The majority of English words are spelled that way – although certainly not all! Abate, for example, doesn’t follow the English spelling norm, but it is a common enough word.

There is a new word every day, which means it will be nearly seven years before there is a repeat. I normally post this blog on Thursday afternoons but waited until Friday so that my results from Thursday (pictured) wouldn’t ruin the game for anyone. And, yes, there is an element of bragging rights to winning this game. I hated seeing all the results being posted on Twitter and Facebook until I played my first game and guessed the right answer on my third try. Naturally, I had to share that news.

So, give it a try and let me know how you fared. Good luck!