“The supreme irony of life is that hardly anyone gets out of it alive.” Robert A. Heinlein 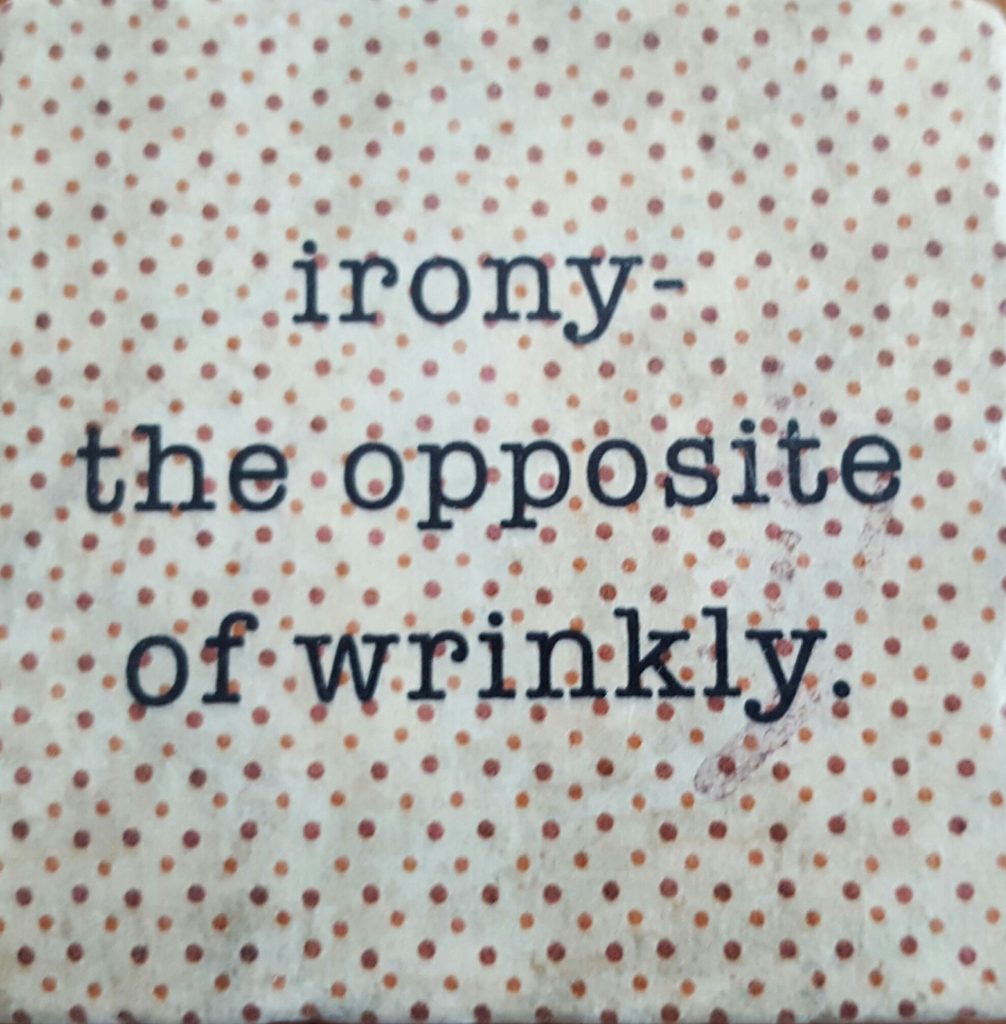 Understanding irony can be challenging. Explaining irony may be far more difficult. And yet, many people seem to recognize it when they see it. How ironic.

Irony, in its simplest form may be defined as a situation in which the result is the opposite of what was intended. Consider this presidential moment:

Irony’s great role in society is to single out human follies and foibles, so that we may laugh at ourselves. One of the masters of irony in comedy is American comedian Steven Wright. Here are a few of his best observations:

“I once drove into a gas station which had two signs in the window – SELF SERVE and HELP WANTED. I went in and hired myself.”

“I think it’s wrong that only one company makes the game Monopoly.”

“What’s another word for Thesaurus?”

“You can’t have it all. Where would you put it?”

In each instance, Wright took an ironic concept, such as employees at a tea company taking coffee breaks, and simply pointed out the silliness of it. Historically, this has been the job of society’s jesters. They recognize the absurdity of everyday life, the things we say and do without realizing the inherent humor in our actions. Good comedians understand irony, and with a simple turn of phrase demonstrate a mastery of language. Consider this old joke by Woody Allen, in which two old people are overheard in a restaurant.

“The food here is terrible. “

“Yeah, and such small portions.”

Irony serves a very different purpose in literature, film, and theater. Dramatic irony occurs when a story plays out in which the reader, or an audience member, knows the potential consequences of the situation, but the characters do not. The great film director, Alfred Hitchcock, would build suspense by placing an unwitting character in peril, then stretch the moment so that the audience – unable to do anything but watch – squirmed nervously in their seats.

Another example of this occurs when characters make an observation which the reader knows is ironic, but the character does not. Shakespeare was famous for this. In Julius Caesar, the audience knows that Brutus is among the conspirators, but Caesar does not, when he says of his friend:

“Yet Brutus says he was ambitious

And Brutus is an honorable man.”

There is also situational irony, in which the author establishes that the characters are aware of the ironical moment that is playing out. The characters (and narrator) may comment on what is transpiring, but the narrative must play itself out. A perfect example of this is found in Thornton Wilder’s classic play, Our Town. The spirit of Emily Webb longs to relive the past, but the pain of knowing what is to come is too much for her to bear.

Some dictionaries will label irony and sarcasm as synonymous. While the distinction is slight, they are different. Webster’s New World College Dictionary calls sarcasm “a taunting, sneering, cutting, or caustic remark; gibe or jeer, generally ironic.” It is a comment which employs irony to make a negative point. Imagine two people greeting each other on a wind-swept rainy day, and one says, “Lovely day, isn’t it?” That’s using irony for sarcastic means.

What’s interesting about sarcasm, and verbal irony in general, is that it doesn’t work well on the printed page. It’s often in the verbal delivery that sarcasm makes its point. Writers may sometimes use italics or bold print to put the emphasis on a word, hoping to drive home the point that this is sarcasm. “Lovely day, isn’t it?” More often, though, an author is compelled to say that the statement was intended sarcastically. “Lovely day, isn’t it?” she said sarcastically.

As I say, the intent of irony is to make a point which highlights the opposite of what is actually being said. It isn’t easily defined, but you should be able to recognize it when it pops up. Be on your guard for it. Don’t let the irony get lost.