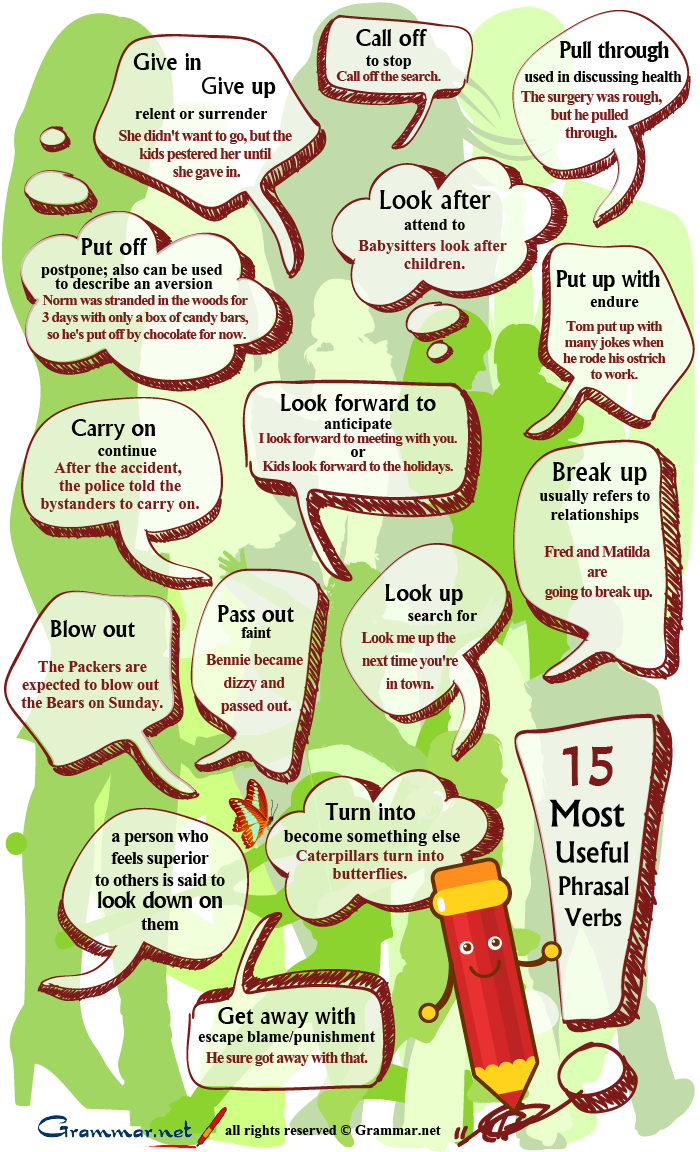 Here are some things you should know about phrasal verbs in English before we go any further:

This infographic has a nice starter list of ‘The 15 Most Useful Phrasal Verbs’ in English, according to Grammar.net. I have 15 more useful phrasal verbs I want to share with you too. Take a look at all 30 of these phrasal verbs and pick 5 you want to use in the next week. Then work on becoming familiar with and using them. The following week come back to this post again and pick 5 more phrasal verbs to work on for the next week. This is a great way to work on building your vocabulary a little at a time.

ask (someone) out – to invite (someone) on a date
Example: After working up the courage all day, Jenny asked Bill out.

bring (something) up – to start talking about something
Example: My mother and aunt always bring marriage up when my boyfriend and I are around.

cheer up – to make someone happier
Example: Paul needed to be cheered up after hearing he did not get the job he really wanted.

drop out – to quit or stop attending a class/school
Example: Sometimes when I am frustrated with school I just want to drop out.

end up – to reach a decision (or take an action) after thinking about it for a while
Example: We ended up moving to Oregon, but it took us a long time to finally make the move.

fill out – to write information in where it is missing, such as on a form
Example: The form must be filled out completely before it is turned in.

get together – to meet with people
Example: We all decided to get together at James’ house before the party.

look over – to check something for mistakes
Example: The teacher told everyone to look over their tests before turning them in to be graded.

make up – to forgive someone (or one another)
Example: After a year of fighting the sisters finally made up when their mother became sick.

run out – to have none left, for something to be empty
Example: The restaurant usually runs out of their desserts early.

shop around – to compare prices
Example: It is best to shop around before buying a new car.

try (something) out – to test, usually for the first time
Example: Harry is going to try my new recipe out tonight.

use up – to finish the entire amount of something
Example: We have used up all the time we have on the meter, so we need to move the car or put in more money.

work out – to exercise
Example: I work out at the gym from 10-11am everyday.

work out – to successfully complete something
Example: When our plan finally worked out we all cheered.