Ward off bad luck on Friday the 13th Posted by Gabriele on Mar 10, 2015 in Culture, English Vocabulary 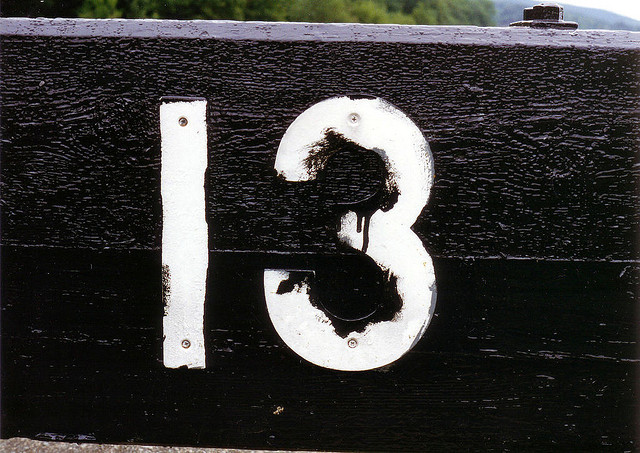 In the Western world, Friday the thirteenth, is considered an unlucky day. The reasons vary for why people think that a Friday that falls on the 13th day of the month is bad luck, but it is fair to say, that if you are superstitious, you will take extra care this Friday. So, let’s take a look at why some people think this day is so unlucky and what you can do to keep your luck with you on this day. Let’s start with a quick look at vocabulary.

superstition (n) – the idea or belief that unnatural forces, those beyond our control, influence good and bad happenings

superstitious (adj.) –  having or showing a belief in superstitions

History:
The number 13 is generally considered unlucky in the Western world, not just on Friday the 13th.  Some people are superstitious about bad luck prevailing* on Friday the 13th because of a connection between the number 13 and the Christian celebration of “Good Friday.” This connection is made because there were 13 people present at Jesus’ last supper before his death on the following day, Friday. It is also likely that a book entitled “Friday, the Thirteenth,” which was about a stock market crash, and was published in the early 1900’s, spread bad superstitious beliefs about this day. Over the years, there have been people who have looked into whether Friday the 13th is in fact more unlucky than other days.  For example, doctors’ report more accidents happening on Friday the 13th compared to other Fridays. Another famous example of an unlucky event on a Friday the 13th is that of the Uruguayan rugby team flying to Santiago, Chile.  On Friday the 13th, 1972 this sport team’s plane crashed into the Andes Mountains and the majority of the players died, while others had to survive in the mountains until they were rescued. The English-language movie “Alive” is about this perilous** ordeal.

Superstitions:
If you are superstitious there are signs of bad luck you will want to look out for this Friday the 13th. Although these events are generally considered unlucky in the Western world, they are particularly unlucky on Friday the 13th.

How to get your good luck back:
If one of these events happens to you, or if you want to keep bad luck away in the first place, here are some ways many Westerners try to hold on to (or gain back) good luck.

If you want to learn more about good luck charms and English expressions about luck, take a look at this previous post I wrote on this topic.

I hope you all have a luck-filled Friday the 13th!

*to prevail = to take over, to triumph
**perilous = dangerous