Why Would You Want to Break a Leg? Posted by Gary Locke on Aug 1, 2016 in Culture, English Language, English Vocabulary 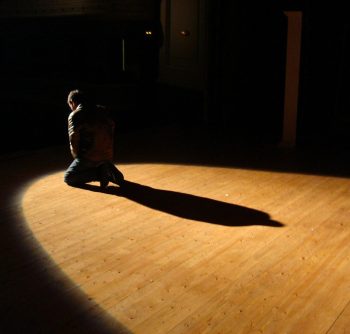 Why do actors wish to break a leg?

I am a thespian, which means that I am an actor. The word derives from the name of the ancient Greek, Thespis, who is said (by Aristotle) to have been the first actor to play a character on stage other than himself. I should add that I am also a stage director, and I have performed many other jobs on and around stages for many years. While this has never brought me fame and fortune, it has added significantly to my vocabulary.

Theater is a source of many unique and interesting words, phrases, and idioms. Perhaps none as odd as the expression, “Break a leg.” It is what actors commonly say to each other just before a performance, and is considered to be a blessing of good luck. In fact, many actors are so superstitious that they believe to not say it would bring disaster. Full disclosure: I say it all the time.

But, why? As with so many customs in the theater, there are various theories on the derivation of this catchphrase. Here are five possible origins to the phrase, “Break a leg!” Feel free to comment, and let me know which explanation you prefer. Or, if you know another origin, please share!

An understudy is an actor who is not a lead performer. Often, an understudy either works backstage, or has one or two very small roles in a show. Perhaps they walk on, but never speak any lines at all. However, they have been trusted with the task of learning the part given to the lead actor in the event that he or she is unable to go on – like breaking a leg, for example. Understudies often joked that they wished the lead would break a leg, so that they could go onstage and become a star. (Of course, sometimes they weren’t really joking.) For the lead actors, then, if they had a great performance they would implore the understudy to wish them a broken leg every night. It became bad luck to not wish them a broken leg!

Booth is the actor who infamously assassinated Abraham Lincoln at Ford’s Theater shortly after the U.S. Civil War. After he fired the shot, Booth leaped from Lincoln’s balcony box to the stage below, breaking his leg in the process. Since this particular evening at the theater didn’t end well for anybody, it is considered to be the most calamitous event in stage history. In the dark humor which abounds in theater, breaking your leg like John Wilkes Booth is the antithesis of good fortune.

For many actors, the final bow is the moment when you can receive your due recognition. It also is the moment when you know that the show has reached a conclusion. The job you set out to do has been accomplished. In fact, the bow probably originated by actors in medieval times bending down to pick up coins tossed to them from the crowd. To bow by bending your knee closely resembles the act of standing on a broken leg. It is a sign of success.

Sometimes, a leg isn’t really a leg. On a proscenium stage, with curtains and stanchions to mask the backstage from the lighted front of stage, this masking is called the stage legs. To break a leg is to step from the dark of backstage into the stage light.

This explanation takes us back to Thespis. Greek theaters were made of stone, and could be quite noisy when stomped on. Audiences in those days would stomp their feet to show their appreciation, rather than clap with their hands. If the spectators stomped their feet really hard, then they could break their legs from exertion. Thus, to break a leg was to receive the highest accolade from your audience.

Whichever explanation you prefer, you can be sure that somewhere tonight an actor will exhort another player to shatter their tibia or fibula. And, hopefully many more times over.