A deeper look at Mem and Si – Esperanto words for self part 2 Posted by Tomaso on Feb 19, 2018 in Esperanto Language, Uncategorized

In January, we took a look at mem and si – two words that are often misused. This month, by request, we take a closer look at some trickier cases. 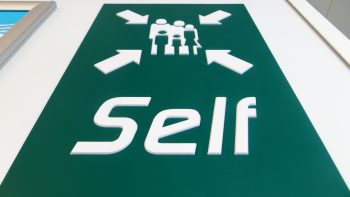 “si” and “mem” are both translated as “self” Photo credit: Howard Lake on Flikr

Me and my big mouth

At the end of last month’s blog post I quipped that we could probably do an entire post on the use of mem and si together. Several people commented that they would enjoy that level of depth. In the meanwhile (the very next day, in fact) I started seeing questions about si which weren’t addressed last month. It looks like there is still much to cover here, so here we go.

It doesn’t depend – si in dependent clauses

As we discussed last time, si (and derivatives like sin, sia, siajn, et cetera) refer back to the subject. Sometimes, however, it’s not obvious what the subject is. Consider a sentence like the following.

Should the last word be ŝin or sin?

The tricky thing here is that there are two verbs in the original sentence. To help us see what is going on, let’s start with a simpler sentence.

In this simple sentence, it’s clear to see that “si” means the guy. The reference doesn’t change when the same sentence is part of a dependent clause.

Now you si it – si with invisible subjects

One more detail to see here, when we say that si refers to the subject, we really mean the subject of the verb. This subject doesn’t even need to be explicitly expressed.

When we use sin here, we know that it means whoever is doing the action of razi, even if it’s expressed as an infinitive without an explicit subject. Context tells us that it means Karlo.

Ok, so the verbs aren’t quite invisible. They’re just in disguise. Consider the following sentence which generated a question from a moderately experienced speaker.

The question was – if we mean “during our visit to Eduardo’s home”, do we say lia or sia? The temptation is to look for a subject, and the only expressed subject is Eduardo. However, just like we need to look for verbs without subjects, we need to look for words like vizito which could be described as a verbeca substantivo. The meaning here is “he was polite while we were visiting [verb] his home.” If we tried to use sia here, it would mean the subject of “visiting” – which doesn’t make sense.

What about si and mem together?

So, maybe I can’t write an entire blog post about si and mem together — not because there’s not anything to say on the topic, but because so many interesting questions keep coming up. Last time we talked about the expression per si mem. This time I’m going to focus on examples with the accusative: sin mem.

As we saw last time, mem is for emphasis and si refers to the subject. Therefore, sin mem is reference to the subject with additional emphasis. If you’re tempted to use si and mem together, ask yourself if you need that extra emphasis.

The use of mem seems justified in the first two cases. In the first case, the teacher taught himself – and not the students this time. The second case could go either way, but the larger context for this sentence (from Beletra Almanako 21) is that nobody else betrayed him, but he did it himself (emphasis.)

In the third case, however, the mem seems superfluous. When a person demandas sin about something, it’s not like they’re running around looking for people to ask and then stop to ask themselves (and nobody else.) It’s just a way to say he’s wondering. In the same paragraph, the author wrote “li promesis al si mem” – which also strikes me as superfluous use of si and mem together, so it might be a quirk of the author.

You know, I think I could write an entire blog post on the difference between sinprezento and memprezento.

Tags: esperanto, herself, himself, itself, mem, refleksivo, reflexive, si, themselves