Just when I thought that I had said everything I could say about si and mem – the two words for “self” in Esperanto, a question came in about using sin– and mem– as prefixes. As a result, we’re continuing the series. This is the third part (see also: part 1 and part 2). 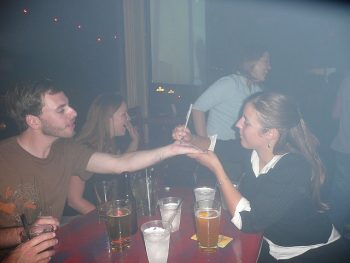 Not only can si(n) and mem be used as free-standing words, they can be used as prefixes – sometimes with a similar meaning. The Esperanto word for “introduction” (as in a few words you might write or say to let people know who you are) can be translated to something like “self-presentation” – but is it sinprezento or memprezento?

I chose this word as my first example because it seems to be the most difficult one. You see fluent speakers using both terms, sometimes interchangeably in the same text. I do believe there is a right answer here, but it would be easier to start with some less troublesome examples.

One common meaning for mem used this way is to show that something happened with no outside help. This gives us words like  memvole (by one’s own will), meminstruito (a self-taught person), memlerninto (someone who learned with no outside help), memdisciplino (nobody else is going to do it for you), memstara (independent – literally self-standing), memevidenta (self-evident).

Another common usage  is “confidence” or memfido. That is, trust in yourself.

Take an expression like doni sin (to give (of ) oneself). A person who does this can be said to be sindona (generous.) The prefix sin– in this case represents the object of the verb doni. (Note, when used this way, we always use si. We never say something like “Vi estas tre vindona“. It’s always sindona.)

Singarda (defensive) is another clear example where we use sin– and not mem-. We are guarding something – and that something is ourselves. We never say memgarda because that would imply that the thing is guarding all on its own. (Of course, now that I’ve said this, I found one author who does use this word; he’s lucky I’m not his editor!)

In some cases you can use either prefix without really changing the meaning. The word for suicide (from Latin “self-killing”) can be either memmortigo or sinmortigo. (Sinmortigo seems more logical to me and avoids the double-m, but memmortigo seems slightly more common.) Generally if it can go either way, it’s better to use sin– especially if there’s any chance of there being confusion with the other meaning of mem– (happening with no outside help.)

I’m reminded of the memtaksilo (self-evaluation form) such as one might do before selecting a level at NASK or on a KER exam. One could argue that you are evaluating someone, that is, yourself (sin taksi) but more likely you would say that the evaluation is happening with no outside help. Either way, we might still prefer memtaksilo to avoid a collision with sintakso (syntax.)

So, what about “introduction”?

My first piece of advice is if you hear someone say one and you’re expecting the other, keep calm and keep the conversation going. That said, my preference is for sinprezento. It’s far more common, and makes more sense logically.