In Esperanto the vowels tell time 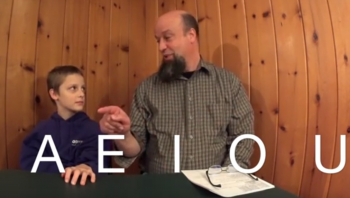 When expressing ideas in a new language, you’re going to want to be able to indicate when something happened. This is called “tense.” Esperanto has three tenses – present, past, and future. This sounds pretty simple, but there are a few pitfalls to avoid. If you’re just starting out with Esperanto, this blog post will have some basic information for you, and if you’re approaching intermediate level, you may find some useful tips as well.

The present tense is used to indicate events that are happening now, or that happen on a regular basis.

The past tense is used to talk about an event which happened in the past and has been completed or has stopped.

The future tense expresses the idea that something isn’t happening now but will happen in the future.

The tense system above sounds simple enough, but take care to work on your pronunciation. These endings carry a lot of information but are found in an unaccented syllable at the end of a word. English speakers are especially prone to turning unaccented syllables into an indistinct “schwa sound”. This is especially true with –as and –is. The A should be a clear “A as in father” and the I should be a clear “I as in machine”. Please see this video where I demonstrate the vowel sounds in Esperanto.

In order to be sure that people will understand what you’re saying make sure to pronounce these clearly. If your –as sounds like the last two letters of the English word “canvas” or your -is rhymes with “miss” or “kiss”, you’re doing it wrong. I meet a lot of post-beginner speakers who make this mistake and it makes it very difficult to understand what they’re trying to say. (Wait, did you go already or are you going to go now?) Here is a second video where I show how to pronounce -as, -is, and -os.

Did I mention that it’s important to clearly pronounce the endings on your verbs?

The present is now, the future is then

Another pitfall – slightly less confusing to your listener than the previous one, but still worth paying attention to – is the tendency to use the present tense to describe future events. In English we can get away with saying “I am going there tomorrow” – but in Esperanto, if we’re talking about something which will happen tomorrow, we need to use future tense.